Two days of La Dispute + Title Fight + Make Do And Mend + Into It. Over It. 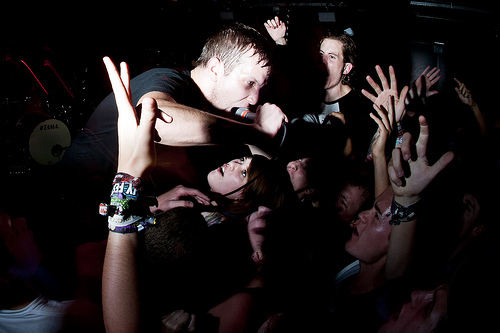 What happens if you take some of the best current bands in hardcorepunk and have them play a show in some of the best scene of Europe? It might sound like a trailer for MTV. But it is the real life. So once again Rold found himself in Belgium. But he was not alone, over 500 kids came to see the four bands.

Into It. Over It. kicked off the evening with some acoustic songs. When walking towards the stage I recognized the guy sitting and singing there. The same guy only minutes ago picked up some of the most extreme records the Reflections distro had to offer. Stuff like Vaccine and Sectarian Violence. To see these same man now on stage playing his mellow songs was quite a… shock? No, but it was a surprise. I never checked out Into It. Over It . prior to this show but I will now cause it sounded like pretty good music to listen to at home. 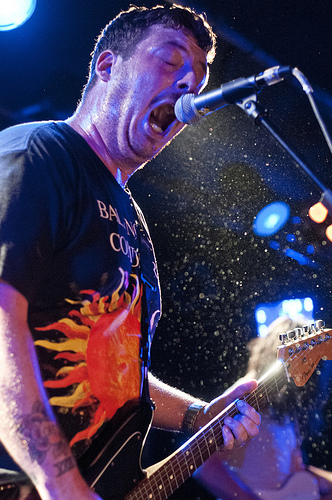 What if everything that you ever loved turned out to be pretty shitty in recent months? Well that does suck. And it kind of is my current attitude towards Make Do And Mend. Their last record just isn’t good except for three songs and their performance at this year’s Groezrock also didn’t gave me the same goosebumps as in 2010. In Antwerp the band started strong with some songs off End Measured Mile but throughout the set you could practically feel the whole vibe getting less whenever the played a song of the new record. Are the kids not up to date with the new material or am I not the only one who just doesn’t like it? The band gave their best but also overdid the rock thing. Make Do And Mend should take a deep breath and reaximine just what made them so good in the beginning. 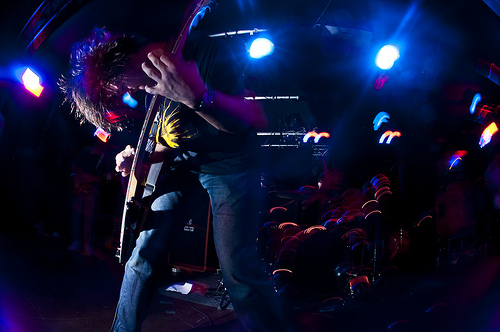 Title Fight and Belgium seem to have a connection. The guys are befriended with Belgium bands like Justice and Not Afraid and their show last year in the new Lintfabriek was the show of the year for many people. With Floral Green, without a doubt one of the best records of 2012, out for a week everyone was anticipating a great show. And we all got it. Stagedives, crowdsurfing, lots of hands in the air and sing a long parts. Title Fight was definately the band of the evening. I loved the new songs and how well they brought them live, I loved the casualness of the band as well as their whole attitude which was all about getting as much people to participate without overtrying or overscreaming themselves.

After the mass chaos of Title Fight, La Dispute clearly had some trouble to do an even better show. And they failed. While I like their music on vinyl, live it’s all a bit to much of the same. Especially when the band plays for over an hour. By then you kind of have enough of the same tricks within their songs. This band could really use some fast, direct songs in their set just for variation. Still they got a diehard part of the crowd going.

SATURDAY THE 22ND @ THE SUGAR FACTORY, AMSTERDAM IN THE NETHERLANDS

While Rold saw the bands play Belgium, Pim decided to check them out in Amsterdam the day after.

On the 22nd of September, Dutch punkrockers De Heideroosjes played their final show at a sold out Melkweg in Amsterdam. So when we arrived at the Sugar Factory (which is pretty much on the other side of the road from the Melkweg) we had to wade through a huge crowd of Heideroosjes fans. Man, I used to love that band… While the lineup tonight sounds quite a bit different from De Heideroosjes in the end it’s all some sort of punkrock so I didn’t know what to expect when we stepped inside. Shows these days seem to get less and less visitors, and with a sold out show across the street… But nothing like that tonight. The Sugar Factory was buzzing with people. Awesome. 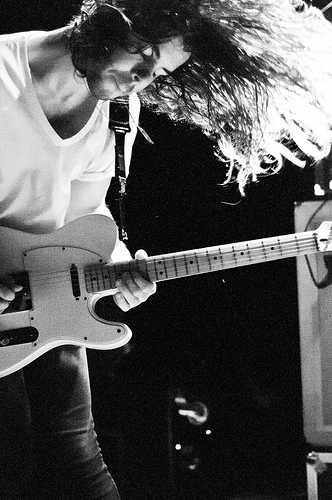 When we put our stuff away, we heard the first tones of Unknowingly Strong. Meaning two things: We missed out on Into It. Over It. Never heard them before and I guess tonight wasn’t going to change that. Oh well. More importantly this meant we needed to get our asses inside, to not miss a thing of Make Do And Mend. Let’s get one thing out of the way first: I can understand the point Rold’s making in his review above, but I don’t agree with him that “Everything You Ever Loved” sucks. I actually think it’s a good record. It’s not “End Measured Mile” (probably my favorite album of 2011) part II but it’s far from the stinker some people make it seem to be. Anyway, I had not seen Make Do And Mend live before (maybe you’re right and they were even better some time ago), but they made a great first impression on me. I enjoyed the hell out of their show. Really, great setlist. Like they picked all my favorite songs of both albums. I can’t remember the last time I thought “Are they done already?” when a band walked off the stage.

Clearly lots of people were there to see Title Fight though, and they delivered. I could simply copy & paste Rold’s review, skip out the Belgium stuff and people who were there would know exactly what I was talking about. I don’t have much to add to that, expect that to me Head In The Ceiling Fan was by far the highlight of the set. Such a great song. Would love to do see em do more stuff like that.

After that it was time for La Dispute. We listened to the first song or something but I wasn’t feeling it at all. I like the singer’s part on the Make Do And Mend track Ghostal (which he did live with them too), but that’s about it. The rest agreed and we made our way outside.

I hadn’t been there before, but The Sugar Factory is a pretty cool venue for shows of this size. The sound wasn’t that great though. It did get a bit better when we moved a bit more to the front of the crowd, and after a while you got used to it, but still.. Oh well, it’s a punkrock show right? And a damn good one at that.

All pictures by Niels Davidse. Go here for more.

Bands: Into It. Over It., Make Do And Mend, Title Fight, La Dispute