Tyranny Is Tyranny – Let It Come From Whom It May 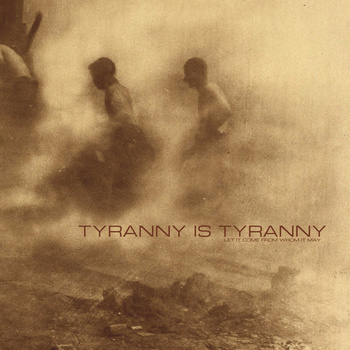 Coincidence or not? A couple of weeks ago I saw Catharsis playing an amazing and inspiring set in Amsterdam. Vocalists Bryan rants against capitalism in between the songs. I didn’t agree on everything however he started me thinking on several things around my own life since we all are surrounded by capitalism. In the mail for review arrived Tyranny is Tyranny’s debut album entitled ‘Let It Come From Whom It May’. On their bandcamp they say they are focusing on dynamics, repetition, and the dismantling of capitalism. Tyranny Is Tyranny is also the title of the fourth chapter of Howard Zinn’s “A People’s History of the United States.”

In the booklet there is a small explanation written for every song, they all have a link to capitalism. Their message is drenched in a rough rehearsal space sound of post metal combined with noiserock with hardcore also involved (“Down the K-Hole”). It never goes brutal or massive, the music is just dreary and ugly as the outskirts of capitalism are also. With modern production skills in mind the bands dares to come up with a different sound. Noiserock played in a Seventies demo vibe.

Mostly the band stays in the slow territories with melancholy being poured out of the guitars. Once in a while a melodic riff in between, but most of the time it stays civic and cold without being modern. Where Catharsis is smashing capitalism in a violent and brutal way (hence the aggressive music and building up to a climax) Tyranny Is Tyranny is showing with their music there is no hope for society if we continue in this way. This is the sound to start reading and thinking about the subject how to dismantle capitalism in a cooperated way.

It gonna be a hard and rough time to throw over capitalism. You hear this struggle in the voices of the three guys who handle the guitars. Especially in the last song ‘Always Stockholm, never Lima’ this fight is exposed. It gives the band something special just as the combination of styles. I hear Unsane, Shellac and Cult of Luna, however they aren’t a copy. Tyranny is Tyranny’s vibe on ‘Let it come from whom it may’ is completely natural and original.