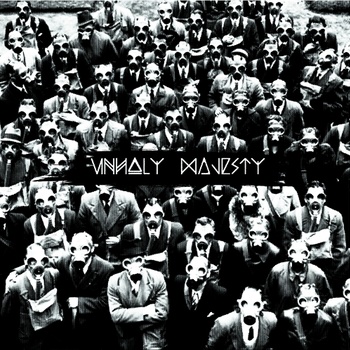 Rising from the barren wastes of Margate comes the sound of unadulterated evil committed to a record in the form of Unholy Majesty. Formed from members of several notable Kent hardcore bands of recent years, this self titled 7” is the bands first recorded output and was originally released by Hemlock 13 records as a cassette. The tracks eventually found their way to Dom at A389 records in the US, who jumped at the opportunity to release the tracks as a seven inch after the original cassette sold out in days.

The record is opened by the intimidating first notes of Age Of Affliction, which is pretty much akin to being suffocated by Chubby Fresh or some other equally renowned overweight member of a metallic hardcore band. The guitar tone oozes menace in an impalpable way that so many younger bands playing this style fail to master, and the drums have a low, deep quality that sounds simply vicious when the band is at full speed. Musically, it’s easy to draw comparison’s to bands like Integrity or Ringworm from the word go, but you’d be doing yourself a dis-service to just lump Unholy Majesty in with the raft of bands trying to rip off Those Who Fear Tomorrow and put a process church logo on everything. The members of Unholy Majesty have served their time in other projects over the years that I don’t feel the need to name here (refreshing to find a band composed of members of others that doesn’t use this is a primary marketing tool), bringing a wealth of experience to the band. Vocalist Duggan has said that Unholy Majesty had a long incubation period behind the scenes, and this really shows through in these tracks. The quality here isn’t something you’d expect for a first release. From the very outset this record goes for the jugular, and proceeds to tear it right out over the course of ten minutes.

Second track Hyperborean is perhaps more of a nod towards classic hardcore bands, rather than it’s thrashing predecessor, being much more straight forward in the riff department but still charging at you like a bull. I spent a fair amount of time trying to work out who does the guest vocals on The Owl And The Serpent too, I’m sure I recognise them, but couldn’t place it. Although they already have a record on A389, Unholy Majesty are still yet to play a show due to geographical difficulties, so don’t expect them to be gracing a shitty upstairs bar near you just yet (although we can always hope). Despite this though, 3 tracks are evidently just a taste of what this band is about, and I can’t wait to hear more. Pick the record up from A389, definitely worth your attention!