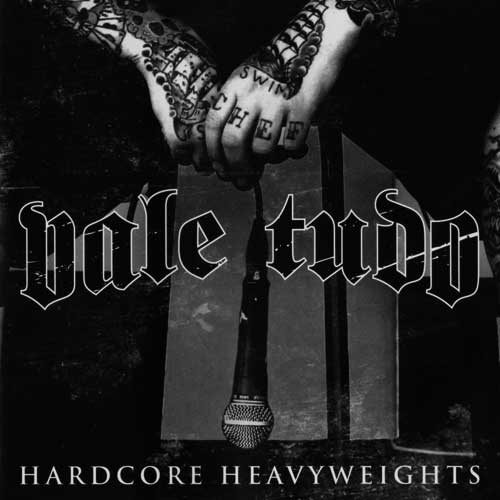 This band sounds like the title of their album and they don’t represent the Swiss mentality of keeping neutral. These guys are hard, but then again their name already suggests as much referring to the no holds barred combat sport. Vale Tudo has just released their second full lenght (though technically third album) and are ready to unleash their sound upon the world. So all cheese and chocolate mentiones aside, this band has been dubbed (not just by themselves) a hardcore supergroup with members who all have backgrounds in hardcore among their ranks. So they used to play in Cataract, Px-Pain, Mulder and Low Down. Two members also play in deathcore band Bloodlust and thrashmetal band Krueger23. Plenty of experience to make some intense sounding, oldschool hardcore.

Ok, the names the bandmembers chose might be a bit on the tacky side with Ice-G and DK Killer (who also dabbles in hiphop) being the funniest, these guys are doing pretty well for themselves down in Zürich since 2006. The band impressed friend and foe with their debut ‘Anything Goes’ (which is the literal translation of Vale Tudo) and a sound remniscent of Cataract, All Out War and Merauder. The main purpose for these guys is to play this music in a way that is fun and the way it used to be: hard and brutal, clearly drawing their influence from bands a decade ago in the general vibe of the record.

After the furious title track, the album really kicks off. This starts with ‘Our World Decays’, where the rhytm section pounds away so heavily that the earth must be shaking. Furious vocals are spat out over the faster parts by the two vocalists, giving the music a more hardcore vibe with its metallic, heavy hitting riffs. Samples are played over the slower musical parts in ‘The One Who Braves The Storm’. A particularly funny song that stands out is ‘Vinny The Bulldog’, which is a bit of a comical song about their violent mascotte, who is a bulldog. You can’t do anything without one these days.

Truth be told, after listening to half of this album you will not feel amazed or anything by it. Apart from its crushing sound at times, tracks like ‘The Harder They Come’ reminds one of Madball and any other band that sounds a bit like that heavy hitting New York style. The question remains if this album has enough in it to make it interesting for the 33 minutes it actually lasts. The answer really depends on your personal tastes. If you think that anything thats hard, heavy and straight forward is amazing, then this is your band. ‘When Push Comes To Shove’ and ‘Robot Stomp’ will then be songs that sound good to you and the fact that they don’t really have much to say and seem to draw on cliché after cliché shouldn’t bother you. The album is well produced, the songs are tight and the band is passionate about what they do. The thing just is, do you really have anything to be pissed off about when you live in Switzerland?