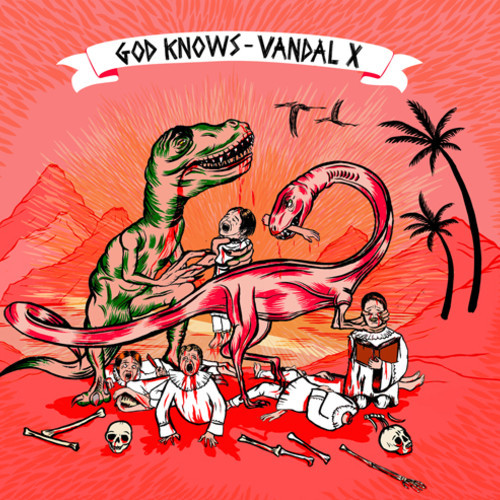 Vicious, ironic, arrogant, noisy and irritating as always; the two old boys from Vandal X annoy you again with an album full of Noise Rock. They’ve updated their hate into nowadays relevant topics such as religion. With the title ‘God Knows’ and the drawing on the front cover of two dinosaurs killing a couple of people (including a priest reading the bible) the naughty guys from Vandal X are still happy with confronting and kicking peoples asses.

They also do that with the rough sound displayed in these twelve songs. They’ve produced their stuff noisy as fuck with enough hooks to stay catchy as old punkrock bands or bands from the late eighties/begin nineties like Helmet or Unsane. I have to warn fanatics of these bands before listening to Vandal X because the sound is noisy and distorted. They recorded their album deep in red and I guess not many will tolerate this sound. I like it because it’s hard hitting in your face and not for the fainthearted. Still you bang your head and scream as a maniac with songs like ‘God Knows’ or Let Everybody Know’.

The vocals sound if a young guy on the streets is shouting towards the police in a demonstration. Yes, you’ll hear the duo once again making a total ‘Fuck You’ statement on this record. ‘On Shuffle’ is a cover of Front 242 melted into the Vandal X sound. The melody stays the same, the rest of it sounds as a regular song of the duo.

For years the band has ventilated their aggression and negative view on the world and there is no sign they are tempering it. I hope they never grow up because this is a true example of music straight from the heart. Compare it with a rebel in the Middle East fighting for his beliefs against a corrupt regime that never gives up.