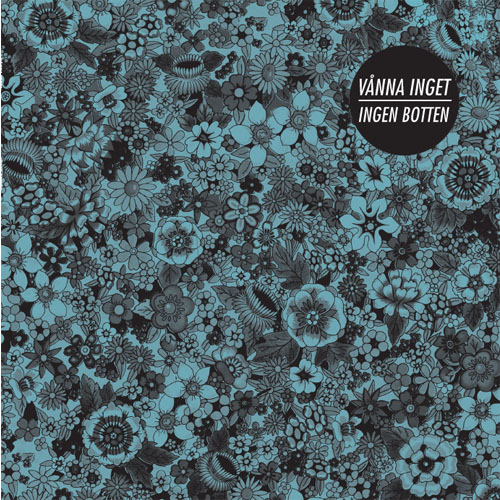 A couple years back I was a bit sad about the disbanding of Masshysteri. Lucky for me Vånna Inget is here to fill the gap. I’ll agree with you immediately there’s a difference in sound, but to me this has the same feel. Both play super catchy punk with a guitar sound that I’ve heard described once as death rockish. Well, I can live with that description. It’s not heavy, but super catchy. Both bands have vocals that stick like glue. Doesn’t matter if you understand the lyrics or not (both sing in Swedish), their songs just ask for singing along.

Vånna Inget hails from Småland, Sweden where they started the band in 2010. In 2011 they released their first record Allvar and in 2012 a four track EP. Late 2013 (yes, I’m a bit late to the party… again…) the band released Ingen Botten, which means No ground (according to google translate). Somewhere along the way the band added a new member who’s responsible for the keys that can be heard on this album. Yes, keys were added to a punk rock album. And to make it even worse for punk rock purists: the overall tempo slowed down a bit too… The big question is if that’s bad thing. I’d say no, that’s not a bad thing at all. The band has evolved, which is their right of course. And I as a listener will hang to them for at least this album, as I can really appreciate what’s going on on it. And I’m not the only one apparently as the band was nominated for a Grammy. Which I think is a bit funny though, as I don’t associate this type of music with Grammy-awards. Oh well… stranger things have happened.

After reading the previous paragraph you might think they completely changed their sound. This is not the case. There’s plenty of songs here that could have been on their debut. There’s a couple of more slow songs, agreed. These slower songs have a bit more Joy Division melancholy in them. You can’t think that’s a bad thing, can you? Overall there’s still enough tempo to make my punk rock heart beat a little faster. The keys are integrated in the sound very smooth as it’s not mixed to the front and natural sounding instruments are used like an organ. One thing remained the same (or perhaps even got a little better): the strong vocals of Karoline. I’m a sucker for a voice like hers. She sounds a bit dark and melancholic, which fits the music like a glove. I’ve no clue what’s she’s singing about, but I get the feeling she really means what she’s singing..

To close it of: I suppose this will not be enough for real punk purists, but if you’re open minded and into melodic, slightly melancholic punk, you definitely need to check this band out!