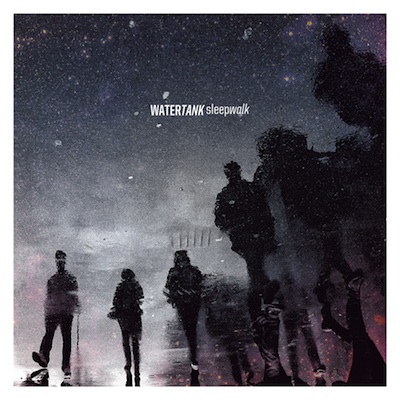 This band has released one album in ten years of existence and it’s called Sleepwalk. According to their biography, the band has been half asleep, partially active, but basically sleepwalking for most of the time. In the last three years Watertank took shape as a band though. The men from Nantes, France now wish to bring their sound to the world.

I have to admit, they are right. You can’t place this driven sound with a heavy post-grunge vibe easily, but name a band like Torche or Cave In and you’re getting somewhere. It didn’t surprise me at all to hear this band opened for Torche and Baroness, Kylesa and The Ocean. Their sound really goes with almost anything. If you get in a real complimentary vibe, a reference to Tool is not even that far fetched.

‘Where It All Begins’ opens with heavy, doomy riffing and clean vocals soaring over it. Slightly hoarse frontman Thomas sings the words like a tired man, which fits here. This is followed by pulsating rhytms on ‘Giant Heads’, which has much more fire to it and a clear stadium atmosphere. There’s a bit of Foo Fighters as well on ‘Ants In Suits’, which is a cool track that also shows a knack for creating atmosphere. ‘Off The Radar’ demonstrates that further with what can be called a neurotic post-hardcore track with a lot of sludge.

I don’t know what Watertank did do in those ten years, but it worked. If you can put songs like ‘Far From Low’ and ‘Sleepwalk’ on the same album and make the listener feel like this is how it should be, that it makes sense… The band combines that sludge and stoner sound with some epic stadiumrock and heavy rocking on songs like ‘Holy Tranquilizer’ and ‘Sharp Beaks Strike Back’. This album is dazzling, even though it never really seems to pick a real direction. There’s never any real fire in their music, the vocals are a bit static at times, but it’s never bad.

Maybe that’s the course of Watertank. A unique sound that dazzles it’s listeners and never really stops amazing you.