We Are The Doctors – Take Your Meds 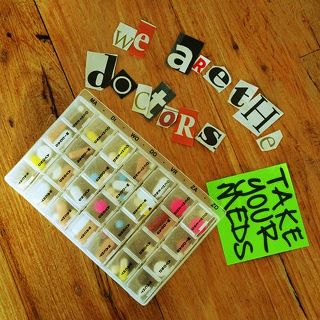 This is a record we got send without asking first (we clearly state to get in touch with us before sending us anything), but hey, we’re not that bad, we’ll give it a fair chance. And then I read the following tracklist:

I kept telling myself, give this a fair chance. They have spend 3 months recording this masterpiece (according to the text that came with the promo) and they even borrowed a Mac from a friend. See Pim, they’re dedicated. Reward that.

I can’t. You might already have seen the 20 I gave this release. That’s a first for me. I’m not the kinda guy to talk shit on a band in a review or something but I just can’t find anything positive about this release. I hope they had lots of fun recording it though? See, I’m trying!

I have to be honest. This is the kind of record you give a starting band and tell them, whatever you do, just don’t end up sounding like this. It’s literally the worst thing I’ve heard in a while and I’m really having a hard time reaching the end of the record (I’m at track 11 while typing this).

“But what’s so horrible Pim?”, I hear you think. Well, the sound is terrible,  not the mix alone or the quality (bad, bad), but it’s out of tune too. Horrible unfunny lyrics (the parts I did manage to understand). The playing… Well, let’s not call it the tightest band ever. And the songs itself… For some reason they decided they wanted to mix beatdown with ska with fast crust parts. That might have sounded like a great idea when they were in the bar drinking themselves to death, but when you hear it back, not so much…

All in all this record could have done with about 13 songs less. But like I said, I hope they had fun recording it. Sorry guys, I really can’t make more of it.

Band: We Are The Doctors