Weak Teeth – What A Plague You Are 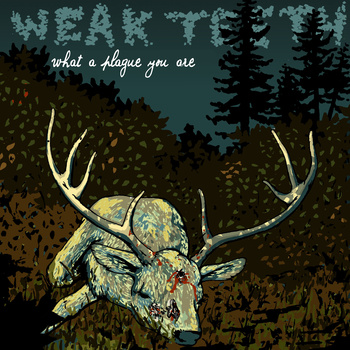 After listening to What A Plague You Are I’m not sure if I have listened to 24 minutes of very aggressive melodic hardcore or 24 minutes of not that chaotic screamo. What matters though is that I’ve finally listened to a band whose songs structures weren’t 100 percent predictable. It’s hard to define the sounds of this American band.

Song titles like Get A Life, Read A Book, Eat A Dick do give a wrong impression of the bands lyrics as they are not as sarcastic and full of wit as one might believe. Record opener With Love From The Great War is another means of the band to put the listener on the wrong foot. Believe me the other ten songs on What A Plague You Are have nothing to do with that lofi, mellow, acoustic vibe.

Though the band is original and most of the songs don’t reach the 2 minute line, Weak Teeth isn’t there yet capturing my interest from start to finish. There’s just a bit too much resemblance between the songs and the strained vocals do get old by track eleven, a 9 minute outro in which the band do show they’re able to create more dynamics than they do in the other songs.

A record like this is a nice surprise as it crosses genre definitions and give Weak Teeth a sound of their own, yet more variation would have make for a better result.