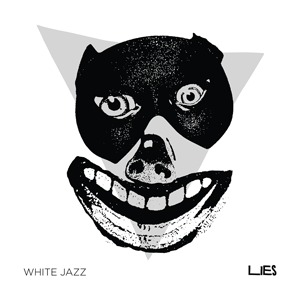 Both White Jazz and Lies are able to use the past members of previous bands as their appeal. Their popularity may benefit greatly from this statement, because their former endeavors are impressive, The Hope Conspiracy and Rise & Fall.

White Jazz opens this split following their Modern Living EP, released earlier this year on Atomic Action!. ‘Bliss’ is a fast-paced, relentless start, no holds barred eighties hardcore in the vein of early Minor Threat and early Black Flag without sounding dated. ‘Gutter Rainbows’ moves more to the later era of aforementioned bands and takes on a slower, more experimental approach. Although it lacks the punch of the first song, this one is more interesting and showcases the promise of White Jazz.

For that matter, Lies doesn’t want to experiment. Two ninety second songs where the goal is clear: destruction. ‘Cycle of Abuse’ and ‘Deny Me’ both offer a stripped down take of hardcore punk, where the former gives some room to breathe with a drum bridge while the latter doesn’t gives you time to recover. Merciless band!

Solid job Deathwish, combining these two bands. Similar sounds but different enough to keep the momentum going. It may be a chauvinistic thing, but I liked White Jazz better though.