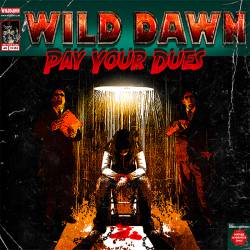 Since 2008 the city of Orléans has their own Cowboys From Hell with Wild Dawn, a rock/stoner/metal formation that just released their second album. The title of this record is Pay Your Dues. The four have delivered it with much conviction and a comic book style cover.

The inspiration comes from AC/DC, Metallica, Guns’n’Roses and Clutch according to the facebook page. Let’s add some Pantera to that and make it all a lot more mainstream and we’ve got the sound of Wild Dawn. I bet the singer has a cowboy hat actually. Oh, the frenchmen also name Motörhead.

So there we go with a screamy voice on typical, groovy hardrock, that just doesn’t linger long enough in it’s grooves to sound stoner on ‘Back On Track’. We can hear a bit of those gritty grunge riffs on ‘Sometime’. Low bubbling bass combined with that Eddie Vedder’s “hunger dunger dang” singing, makes them end up being a bit Alice In Chains (yes, I know Eddie Vedder is in Pearl Jam). The band sounds overly American, polished and neat.

On ‘S.A.D. Story’ the band tries that slow, groovy stadium sound. They definitely know how to play this sound and get that flowing, catchy rhythm int heir songs. There’s also the song with feeling, titled ‘Better Days’. It’s what you’d expect when smoking-engines rock bands try to be sensitive, a bit uncomfortable.

Though a decent band for sure, Wild Dawn doesn’t quite slip in anything of themselves and sound rather derivative. The intro of ‘Ain’t Life Grand’ for example, reeks of a perverse hybrid of Bon Jovi and Led Zeppelin. Fortunately, there’s a market for groovy bands with that vibe of a frontman grabbing his junk on stage thing going. To sum up, good record, but nothing that hasn’t been done a million times and better before.