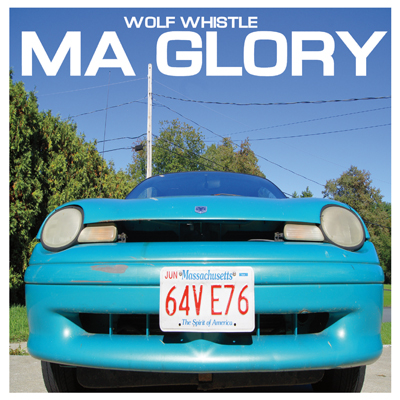 Wolf Whistle is a band from Massachusetts that has been conceived on a Blacklisted/Have Heart tour somewhere in the 2000s. This “supergroup” features Pat Flynn (Have Heart fame) on vocals, producer and xFilesx member Trevor Vaughan on guitar, Evan Radigan from The Rival Mob on drums and Derek DaSilva from Working Man records on bass. Wolf Whistle has released 2 demo’s and this release, their debut 7”, has been a long time coming.

For such a long wait, the songs are very, very short. MA Glory contains 11 songs clocking at just 8 minutes. This isn’t surprising at all, Wolf Whistle plays an extremely fast style of hardcore reminiscent to Infest or maybe Coke Bust. Whatever they sound like, they pull it off perfectly.

A few standout things that make this 7” a lot more interesting that I thought it would be are the variation and the lyrics and themes, I’ll try to address both briefly.

A record filled with very fast songs gets boring fast, songs just fly by. Wolf Whistle manages to keep things really interesting by switching things up a few times. Of course, most songs are still really fast (Cape Conciliation is just 19 seconds long) but it is the slower, sludgy track “En Attendant Hudon” that really stands out. This song about ex-Have Heart and Wolf Whistle guitarist Ryan Hudon’s absence is about a minute of pummeling bass, ripping guitars and haunting vocals. I must say that this is by far my favorite track of the EP; the sound is original and full, Pat’s lyrics are innovative and the song creates a great contrast with the other tracks.

The thing that really ties these eleven songs together, apart from the signature feedback-laden guitar sound, is the continuous theme. As you might be able to see, this record is mostly about the state Massachusetts. The tone is being set by a sloppily played bagpipes tune that some might recognize from the Dropkick Murphy’s record Do Or Die, a MA classic. This record is full of bitterness and sarcasm, Pat Flynn manages to throw out all of his discontent and frustration in a majestic way; in these short songs he adequately tells about small town minds and dreams, New England climate, messed up politicians and love. Another standout is the reference to the poet Raymond Carver in the song Summer Insomnia, a reference to the poem Winter Insomnia. This depth in the lyrics really makes this record extra special for me. I’d also like to add that Flynn’s vocal delivery differs from what he did in Have Heart, Wolf Whistle features manic cries and desperate screams which makes this record a really emotional experience.

This record is definitely a must-listen, as it is one of my favorite 7”s of 2012 so far. Do yourself a favor and pick it up at Six Feet Under Records or a distro. Wolf Whistle’s debut LP is coming somewhere in the near future, look out for Private Hell on Triple-B records.

Other than being a great musical work, this 7” can also teach us all a thing or two. I’ll leave you off with a line from Small Town Blues:

Going nowhere? Flip that coin. You, only you.