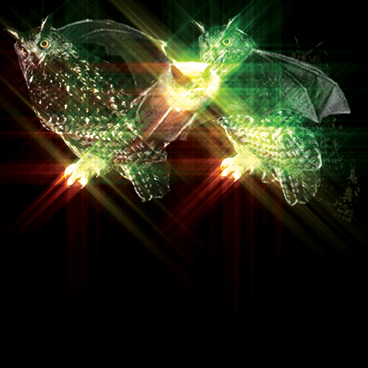 I’ve been looking forward to this release for quite some time now. A couple of years have passed since the first song “On The Attack” was unleashed upon the world. “The Second Life” was up next, but after that… Complete silence. Last year I did an interview where they stated new stuff was in the works. And now the wait is finally over… “Deutschland, Deutschland! Into The Night” has arrived.

Cro Mags (no surprise, ex-True Blue members in this band) mixed with Depeche Mode (how’s that for a surprise?). New wave and pop influences. Yes, you read that right. Not your everyday combination. In result, opinions will be all over the place with this one. I don’t think you can “kinda” like this. You either hate it or you love it. I’m clearly with the last group though.

So what does this MCD bring us? 6 songs and an outro/poem in “old German”. “Heavens” doesn’t differ much from the version that was put online before, but they’ve re-recorded “The Second Life”. For the Terror fans out there, Scott Vogel sings the second verse. Songs like “Into The Night” & “The Void” are the more electronic songs. In general both influences are balanced just perfectly though. While 20 minutes is just fine for an MCD I would have really liked to hear a re-recording of “On The Attack” as well, but I guess you can’t have it all. They do play that one live though.

The artwork needs a mention as well. The photo on the back already was a hot topic. The rest of the artwork is pretty simple, but in a good way. There’s a statement on the inside of the booklet that you should read yourself. Aside from a small black logo, the CD has a blank surface. It’s meant to be used as a mirror, reflect on yourself. Although I don’t think it looks that good I really like the idea behind it.

Oh well, just listen to some tracks at www.myspace.com/worldcollapse & www.worldcollapse.com and judge for yourself. I know I’ll be spinning this disc over and over again. One of the greatest releases of the year already.