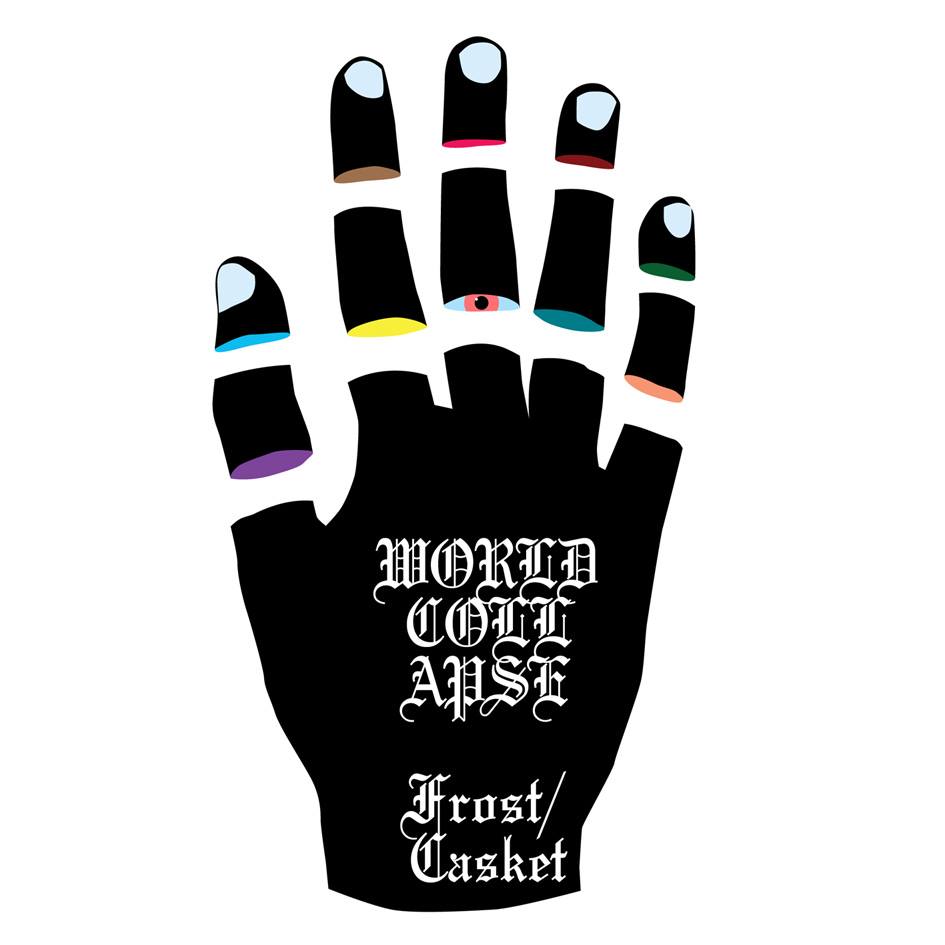 6 years. It’s been more than 6 years since I reviewed “Deutschland, Deutschland, Into The Night“. A lot has changed in those 6 years, two things are still very much the same though: opinions on this band are still firmly divided into two camps, and the band still does whatever they feel like.

I could tell you about the 2 interludes on this 7”, “A Flake Of Snow” (because it has vocals, it’s technically not an “interlude” though) and “Preludium” (nice classical reference there). They create a nice relaxed mood / atmosphere. I could tell you about the artwork (by Stahl R), which is, like everything World Collapse does visually, totally hip. It’s at the very least, a far cry from the black & white xeroxed covers you usually see on hardcore records. We could talk about the fact they replaced singers (something I didn’t even notice at first), but let’s talk about the main two songs on here.

I’ll be completely honest, when I heard “Casket”, the song they put online first, I wasn’t blown away. It didn’t really stand out to me. Maybe because it’s kinda a “greatest hits” of World Collapse blended into 1 song. The big drums of “Heavens”, the thunderous, plowing feeling of “The Second Life” and the synths of “Into The Night”…

And then I heard “Frost”. Man, any doubt I had was completely blown away. That’s a great song right there. Know that feeling when you hear a song and without even noticing you keep putting it on again and again? When you’re getting more enthusiastic with every play? Those songs you’ll keep going back to when you put on the record they’re on. I had it when I heard “On The Attack” for the first time. The same goes for “Heavens” and now there’s “Frost”. It’s damn catchy, but still hard. Not “tough guy” hard, just hard. I can’t get enough of that song.

And while “Frost” is still my favorite song of the two, I did start to love “Casket”. It probably just needed to sink in. It totally feels at home with the rest of the tracks and ends the EP in style.

All in all, some people might say that 6 years is a bit much for 2 songs and 2 ‘interludes’. Maybe it is. It’s pretty simple for me though, if it takes another 6 years to bring us the next ‘Frost’ I’m totally fine with it. Yearlist material once again. Now get out there and play some shows guys. It’s been a while.