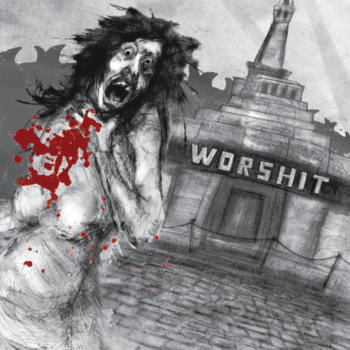 There have been a few Russian bands on SWNK lately. Now we have yet another band up for review. Meet Worshit, a fast 80’s hardcore inspired band that brings you genuine, pissed off hardcore.

Worshit sounds sincere. Sincerely angry. How come they manage to come across as a band that is really pissed off, where a lot of bands seem to fail? Maybe it’s because they had to grow up in Moscow, which is not exactly a walk in the park.  The first song on the EP ‘Worshit’ kicks right in with a statement against the majority of the Russian population. While a lousy government looks down on their own people, and no one dares to speak up. ‘They build vast mansions and buy posh cars while millions of their people starve’. Wouldn’t that piss you off too?

It’s not just the government that Worshit seems to be fed up with. In ‘Nothing In Common’ even  the so called ‘scene’ gets taunted. ‘Anarchy, unity, animal rights, bullshit that’s too far from real life, imbecile lyrics without even rhymes, your “personal” whining is just fucking lies’. Enough said.

Musically Worshit could be best described as a fast paced 80’s hardcore band. To me it sounds like a combination of early Agnostic Front and Negative Approach, but with a slightly modern touch. Raw, relentless and fast paced. This is what aggression sounds like. If you want to hear what genuine hardcore sounds like, you should give Worshit a try.