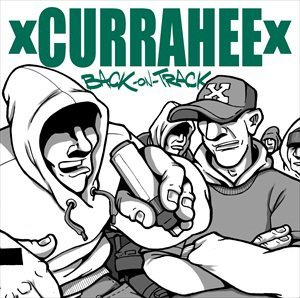 Remember Impact (later renamed Stand & Fight)? I for one had high expectations of that band. Come on, ex-members of Ten Yard Fight and Carry On doing a new straight edge band? How could one not hope for a killer release. Unfortunately this was one of those bands that couldn’t really live up to the standarts of their previous bands. But the band did come with the best zip-up any straight edger could ask for.

xCurraheex reminds me a lot of Stand & Fight and thus of Ten Yard Fight as well. Vocalist Smit has a voice much like TYF’s Wrench. And musically the band also follows in the footsteps of one of the bands that put this kind of music back on the map again. Yet if you take the TYF discography the demo is essential, the Hardcore Pride EP is pretty good and their last record The Only Way is a classic. The only record TYF shouldn’t have made is Back On Track. And let it be just that record which bares the most resemblance to xCurraheex’s Back On Track.

This EP (as well as TYF’s Back On Track) is generic in it’s music as well as it’s lyrics. And though I’m all for generic youth crew, a band does have to add an extra something to stick out. What that something is differs from band to band. It can be adding a second guitarist for extra melodies or writing really original lyrics. xCurraheex doesn’t add the extra flavour in this release.

According to the booklet xCurraheex has been through some shit to get this record out. If you read the whole thing, the fact that it got out and the band is still playing is an accomplishment itself. So I’d say go and support these guys. There’s a new The Only Way hidden deep within this band and I hope they will stand and fight long enough to make the same impact as Ten Yard Fight once did.