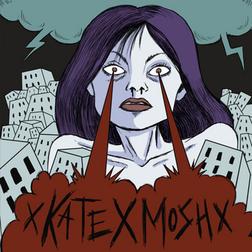 I think that Kate Moss might actually be flattered to hear that a band is named after her. Well, not directly of course and xKatexMoshx probably has little praise for the supermodel to offer. However, they do have 16 songs and managed to record 14 of those for this 7″. The sound is noisy power-violence that doesn’t demonstrate that much diversity. The other two songs will be on an Italian promo with covers.

The inspiration is drawn from bands like Charles Bronson, Spazz and Asshole Parade. That is clear from the first notes of ‘Old Fascists Suck Twice’ or ‘My Tea’ (interesting title).  The last song has a sludgy intro but then its just a brutal assault on the drums. ‘Assholes Can Go Fast’ is also over before you know it with a few hoarse shouts and machinegun drums.

This band from Rome doesn’t seem to take life all to serious with hilarious titles like ‘Dictionaries’ Revenge’, which has even got some funny, silly guitar sections. The band members used to be active in Taste The Floor, Warpeace and Drive Tasty (all not the most amazing bandnames one could say). They have got extensive live experience, opening shows for Wormrot, Agathocles, Vitamin X, Extreme Noise Terror and Weekend Nachos. Clearly it’s all about fun with these guys. The quality is pretty dreadful and songs like ‘Stigmatized’ seem to consist of angry, incoherent shouting and lack any sort of subtlety.

‘You Failed (in one way or another)’ does amuse one, even if just by it’s title. So does ‘The Happy War Song’ which has some grooving intro, as far as one can call this such. So a good record this is not, it lacks any form of technical skills and relies purely on fast playing and harsh distortion to gain any impact. Still, it’s probably better than Kate making an album herself. The lyrics are poor and sometimes just silly.

All in all I can recommend this album to anyone who likes simplicity, bad English and aggressive sounds.