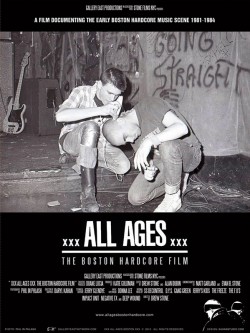 Starting off with footage from the Gallery East reunion show (a venue that was central to the early Boston hardcore scene), it has live footage of both DYS and Jerry’s Kids. At some point during the Jerry’s Kids song it almost seamlessly goes into 1982 live footage of the same Jerry’s Kids song (it is actually explained in the audio commentary they made a mistake and it’s from 1983), and this is where the documentary really begins. There’s a shitload, and I do mean a shitload, of people from those days reliving memories, telling stories of what it was like, how things got started, what bands infuenced them, how Gallery East became so important and how things evolved in general. These include band-members (from DYS, SSD, The Freeze, Slapshot, Gang Green, Jerry’s Kids, etc) to people who were part of the scene to the people from Gallery East. Al Barile (SSD) is missing from the list, as he apparently didn’t want to be part of this, but with the amount of people interviewed, I didn’t really miss his input all that much. One part I thought was really cool was a short piece on how the cover of SSD’s ‘The Kids Will Have Their Say’ record came about, and it also shows the rest of the photos of that photoshoot with ‘The Kids Will Have Their Say’ playing over it. Overall the DVD gives a good insight into how things got started and how it evolved over time. There’s a decent amount of old live footage shown throughout the DVD which is amazingly high quality in sound and image. Not to mention there’s a ton of old photos and flyers shown throughout the length of the DVD.

The DVD is housed inside a nicely done 6-panel digipak with pictures and flyers printed on it. There are a few extras on the DVD including a great video made by Springa (SSD) with him going through some of the stuff he kept from those days (and he kept A LOT), which all appears to be stored in his mother’s house, which could almost be a house you would see on those hoarders shows. Except it’s all hardcore memorabilia that will have collector nerds drooling in front of the screen… With all the great live footage that is shown throughout the DVD, I was hoping there would be more of it included with the extras, but unfortunately there isn’t. Also, the sound levels differ quite a bit between some segments, which is weird considering how much detail went into the rest of this DVD and the packaging. But at the end of the day, this is a film/documentary that I thoroughly enjoyed and would consider mandatory viewing.