Year Of No Light – Vampyr 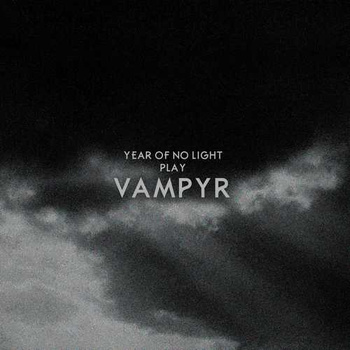 With the albums ‘Nord’, ‘Ausserwelt’ and the new album ‘Tocsin’, Year of no Light has found and brought us new territories of post hardcore, psychedelica and doom. In between they created a soundtrack for the (almost) silent movie “Vampyr” from Carl Dreyer. In this movie it’s of course all about finding out who the Vampyr is after someone’s daughter is caught with vampire bites.

This review is about the soundtrack and not the movie so enough about that. Initially the band did a few shows when the movie was broadcasted. One of them was on the Roadburn festival 2011. It was one of the highlights because of the sound in the theatre was superb. In 2012 the band decided finally to record their musical interpretation of the movie.

What you get is a soundtrack spread over 4 sides of vinyl together with a CD copy that has the full ride in a one-time session. It starts off with slowly building up guitar noises and with accompanying drum patterns the music is often going to grandeur climaxes, at the same time with an exciting moment in the movie.

In the middle there is room for piano playing, to give some rest for the ending. Especially what follows in “Saignee/Revelations”, “Passages”, “Outremonde” and “Profenation/Redemption” is breath taking and during these songs the plot of the movie is ending. The band creates the parts and uses the same approach as on their record ‘Ausserwelt’ so expect multiple layers of guitars and two drummers filling up the room of the recording.

Mostly the music has more hints to post-metal and post hardcore than the normal doomy parts that are used in a Year of no Light record. The band is, as always, flirting with the dynamics of dark and light elements in the music with strongly emphasizing on the hypnotic melodies before bursting out in amplifier worship.

Their regular albums are top notch and this one off project is from the same quality so if your are still into genre expanding music, as Year Of No Light does, this beautiful release is necessary in your collection.

Band: Year Of No Light