Yog – Half the Sky 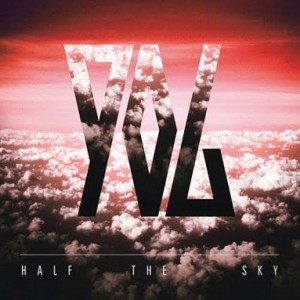 Yog is from Switzerland and plays precise Math-Grind with some hardcore punk thrown in. After two EPs and a full length, ‘Half the Sky’ is their second album. In their songs they combine a hysteric aggressive style with melody. Not typical for a Grindcore band and actually Yog is more or less taking old The Dillinger Escape Plan, Brutal Truth and Coalesce as examples.

They are not as inspired as them but not many can top the masters of this genre. The stop and go elements are predictable but Yog sounds inspired when a melody hardcore riffs pop in. Like in the opening song “Needle in Black”. In “92%” they follow this path again. The Coalesce inspired ending of “We Need Your Opinion (just in order to ignore it)” makes it one of the best songs of the record.  On the other songs it’s just copying Dillinger Escape Plan in their  ‘Calculating Infinity’ style. Just a few bands have the technical ability to play the same style fluently and Yog can. The scream of vocalist Yonni Chapatte doesn’t have that bite Sean Ingram and Dimitri Minakakis have though so his screaming is a bite monotone after a while.

Since I love this style since the release of ‘Calculating Infinity’ I can enjoy Yog’s album. I have to admit thought that I won’t be listening to this a lot. The cold production and the total madness of ‘Half the Sky’ also helps in enjoying this album. Fans of early mathcore should take notice.