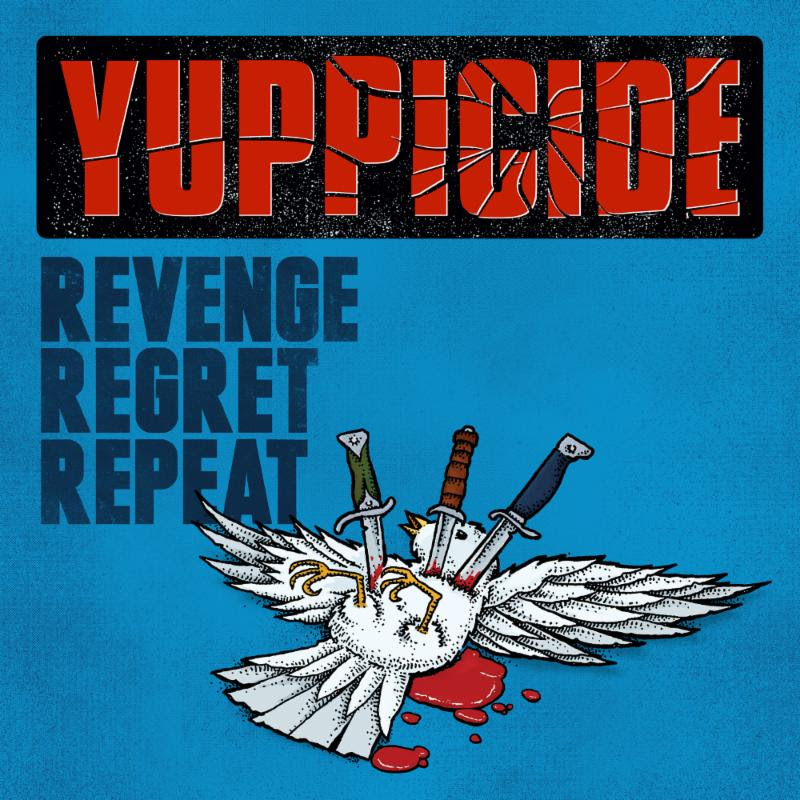 George Carlin is on this record! Well, at least a sample of him is. For those who don’t know about him? He is one of the greatest American thinkers of the last century. You should really check him out. For those who did know about him. You know what you are in for!
I already explained once here why Yuppicide deserves to be much wider appreciated. Because really? I don’t know if these guys want to be the biggest band around. What I do know is that they want to make the best possible music they can and with thought provoking lyrics. And that they do. That they do very well again.

One thing really hits me with this album. We have a nice selection of favorites when it comes to New York Hardcore bands that do well over here. And I am going to focus on the bands that actually have the decency to put out new stuff. Because come on, everybody know you made some statements back in the days that might ring a bell. Everybody knows these are the songs everybody loves and likes and knows the lyrics to. But does that mean you just have to recycle speeches and add 2016 to them? You know that a lot of bands had their hardrock or metal period and we forgave you. Yes we did. And now we pay very hefty prices for a ticked to see you jump around in your forties or fifties and we still sing along. And of course less people are singing along with the newer songs. Yuppicide never made that shitty hardrock album, seemed gone for the ages and now can join up with Agnostic Front, Slapshot and Sheer Terror when it comes to touring bands that come to Europe and at least have the decency to offer you something new.

Aside from that there is again more than enough thought provoking stuff on this record that even challenges their own crowd. The most amazing thing is that this band is intellectually challenging when it comes to the lyrics but never loses their obvious link to the normal man in the streets. This is your thinking man’s hardcore with sing a longs that are catchy and accessible. While the songs are harder than ever their lyrics steer nicely away from trauma’s about stabs in the back, the standard politicians are stupid rants and the shot at a universal hardcore anthem that will be covered thirty years from now. No, here we find songs about doubt, revenge, corruption and anger. Even better, the band asks questions while simply giving you the chance to make up your own mind about stuff instead of hammering you down with empty slogans and cliché ridden tracks full of barking dogs.

Musically this is an album that incorporates everything that made me fall in love with the genre. Great songs, great lyrics and a chance to get out of your comfort zone and discover something new. This art seems to fade away. If you were there in the late eighties and early nineties you will get this band. This band offers you a balanced dose of nostalgia and undeniable progress in their own distinctive realm. That this should be rewarded by buying this album so you can sing along on your way to your shitty job when it comes to the older generation of hardcore enthusiasts is without question. I really hope the younger kids will discover this band and get a spark of what made hardcore great to begin with. This album challenges us all. If you are jaded with the scene give this a couple of spins. I promise you a tingle down your spine. Or the realisation that the new Adele is the way to go. Either way this is what hardcore should sound like.

A true modern classic that you should have bougt already!