Archive footage: Justice & Rise And Fall playing the Netherlands in 2007

Forgive me for that title, but I had no idea how to tie together two not too related clips for this article. And I didn’t want to make 2 posts out of these 2 short (and I admit, pretty crappy) clips.

Anyway, when we played shows with Said And Done I usually took my camera with me. Not the best camera, not the best footage, but better to put this footage on SWNK than leave it rotting on the tapes right? There might be someone out there that will enjoy it.

Justice @ Flogfest – Staddijk, Nijmegen (The Netherlands) on the 9th of June 2007

Let’s see. Flogfest. I don’t remember much from this show to be honest.

I think it was one of the first shows of 1000 Miles Ahead with their new singer (at the time)? Brat Pack probably kicked ass, as always. Gascoigne still had Bootsman on vocals right? I think we did the Only Living Witness – Prone Mortal Form intro.

Justice had recently released “Escapades” and played their first show after touring. I always thought “Escapades” was a great record musically, but vocally could have been better. I don’t know why though, on “Live And Learn” he sounds a lot better. And it’s not bad on “Escapades” or anything, but live those songs sounded better. If you listen everything from their demo (which I love) to “Live and Learn” it’s cool to see how much they grew through the years. 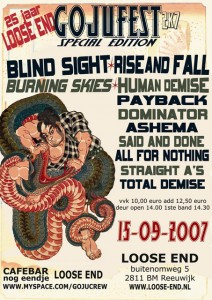 Gojufest. Well… I have no recollection of our show whatsoever. We played pretty early, so it was probably pretty uneventful. Half of the band had to leave because of other plans and I stuck around with our roadie (as in “usually-drinking-all-our-beer-but-this-time-actually-driving”) Sjef, because he wanted to see Rise And Fall.

So in the end I ended up drinking some beer, singing along to Payback (I don’t know a single song by them) with Niels (Straight A’s, Cornered) and leaning against the wall of sound created by Rise And Fall. I’m not a fan of that whole clevo sound (and related bands), but I always loved Rise And Fall.

Oh and I remember being up front and shouting for “Davidian” (a song they used to cover) before and after every song Blind Sight played. Drunks can be so annoying… Sorry!