At the beginning of this month we (Said And Done) went on a trip to the United Kingdom (hitting Lendelede in Belgium first) to play Leeds and Canterbury. Leeds was cool but the lineup for Carry The Weight Fest was insane. Let’s have a look at the flyer: 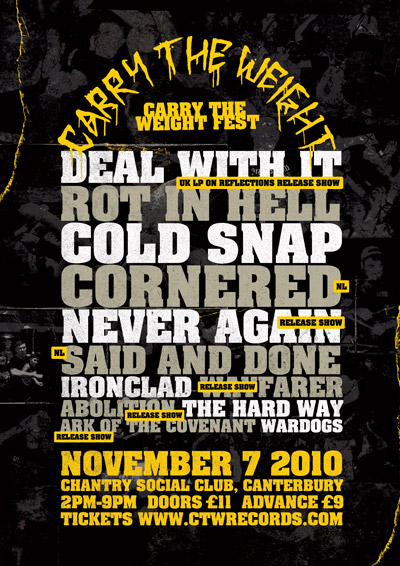 Carry The Weight Fest flyer. Made (and edited a couple of times) by yours truly.

Nice huh? Even with the cancellations of Ironclad, Cornered and Deal With It one hell of a lineup. Final shows, release shows, lots of cool bands, good people to hang out with and a great atmosphere the entire day. This fest had it all. It’s pretty cool to see what Tomas and Pat achieved with Carry The Weight in such a short time. Please support them in doing this and keep on picking up the records they put out.

The Never Again footage below you might already know since I put the links to that footage here and there, but the Cold Snap and Said And Done footage is brand new, just uploaded it.

Said And Done. New song (not yet recorded, might change too) + a cover of Leeway’s “Rise And Fall”.

Cold Snap. Final show. Opening their set with Judge’s – The Storm. Filmed by our bassplayer.

Cold Snap. Final show. Part III. Only part of a song though. Filmed by our bassplayer.

Never Again. Final show. Part II. Last song that I could film before the batteries of the camera died out.