Time for another dig in the ‘Pim-taking-a-crappy-camera-with-him-to-Said-And-Done-shows’-vault. This time it’s Civil Terror playing Haus Der Jugend in Neuss (Germany) on the 10th of January 2009. Thought that would be quite fitting after all the political correct statements of yesterday.

This show was organised by Guido (who we recently interviewed about his latest project Good Intentions). I don’t remember much from this show, but I do remember the amazing venue with the bands playing on a ramp. Awesome. As for Civil Terror, they were another band fronted by Jasper / Kudel (‘as seen in’ A Step Apart, Dark Day Rising, Eye Of Judgement, Starve, Echoes, Karel Anker & De Joden and probably many more). I still love that song “Roadkill” (“WHERE THE FUCK DID YOU LEARN TO DRIVE?”),  and the fact they titled their full length “Surrounded By Assholes”. Yeah these guys were all about being as subtle as possible. They also covered Fear & Judas Priest live. Well. 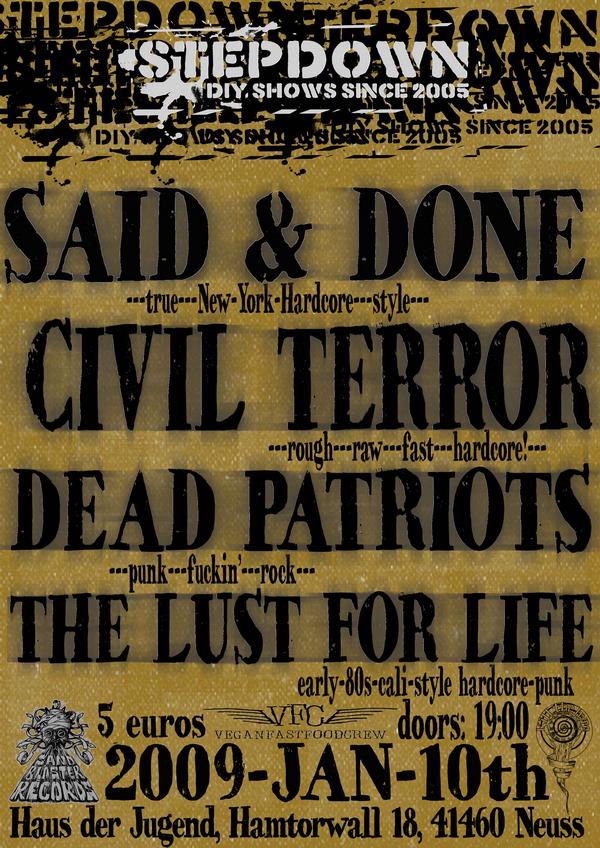