Incubate 2015 is really an event for music maniacs. Even on the first days (most of the acts play in the weekend) you run into clashes and some tough choices have to be made during the week. For seven days running around in the streets of Tilburg to find all venues picking that amazing show is exhausting you. Missing sleep, lack of concentration at work and at home are the usual side effects during and after the festival. You have to be crazy to organize and visit the festival. More than 20.000 fanatics made a route and tried to see as much as possible acts out of the 350.

From the dirty streets of Liege is Umungus; a band with Dagger’s drummer on board that plays an interesting mix of psychedelic rock and spaghetti western soundtracks. The drummer keeps the pace energetic and early on the festival this is one of the best surprises. Coming over from Japan is noise legend Merzbow. Expecting a heavy noise nightmare his set is slightly relaxed with the incorporation of rhythmic pulses. After 45 minutes the noise hero is done; leaving the audience grasping for air and silence. Four Shoegaze Black Metal boys from France are closing off the Monday. Alcest picked their best songs from their albums and created a bed of roses everyone could comfortably sleep on. No surprises just a show with great songs; time to go to bed because six days are left. 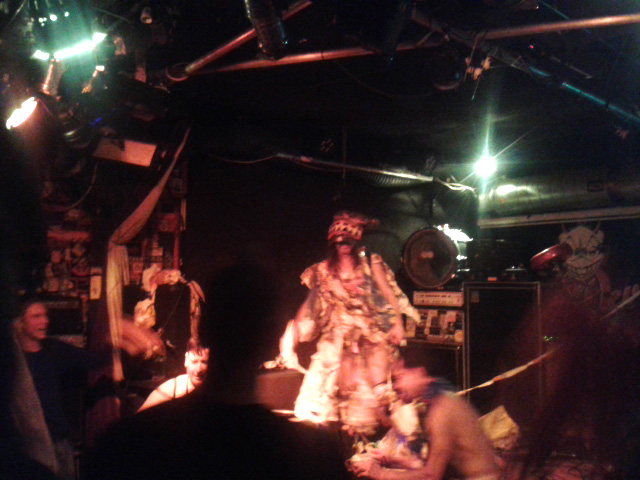 Cedric from Rise & Fall has a new band that is called Partisan. Their first record will be called Belgrado. No I am kidding. The mix between alternative rock and punk sounds promising however Cedric needs to improve his singing; he seems to be a bit insecure but I bet this will be over after a few shows. In the Midi Merzbow is again turning the knobs and he invited drummer Balazs Pandi. The improvised set was a bit disappointing because the complete overwhelming outburst never came. Melvins took over the stage later and I am still speechless what King Buzzo and friends showed us. With over 30 years of experience they still knock every younger band of the stage whether it is sound, song writing or no talking just playing endlessly for almost 90 minutes. King Buzzo doesn’t need time to tune; he will do that during the drum intro. They picked their best songs from their career and proved they are easily the best band in Grunge, Alternative Rock, Stoner and Noise rock. How hard the noiserock band Girlband tried afterwards in Dudok; their hectic and intense creations felt as loose sand, especially after Melvins’ show.

Hardcore/Powerviolence act Full of Hell recorded with Merzbow last year and this time they shared the stage for the first time in Europe. Don’t expect anything from their album; the set is purely an improvisation of noise, saxophone sounds, demolishing drums and guitar feedback. The creature born out of this would scare the hell out of your mother and mother in law. Spacerock giants from Eindhoven Radar Men from the Moon are presenting their new record with an extra guitar player and drummer. Loads of monotonous kraut rhythms are filling the Hall of Fame making this show danceable and transcending. Melvins are again showing they are the best band of the whole festival. At the end of the show bass player/ vocalist Jared is taking the spotlights. He put his bass guitar in a looped sound and is going to walk through the crowd singing the same sentence over and over again. In between he taps a draft beer and later is crawling on stage towards the backstage. Two songs from the monsters of Primitive Man is too less but again the loathing Doom Metal is how this music needs to be played. Closing the night is Teeth of the Sea which could be best described as a noisy dance night with raging guitar and trumpet sounds. Incubate’s Wednesday is the best day so far.

Unconventional hardcore from VVounds and unconventional noise (with drums) from Sly and the family Drone is kicking off the Thursday. Later it is time to visit Theaters. First on stage are Fennesz + Arve Hendriksen who are mixing electronic music with guitar drones and trumpet sounds; minimalism in full effect from these masters of improvisation. In the smaller room Roedelius (known from Cluster) / Schneider showed us how krautrock mixed with electronic music sounded in the seventies. One long masterpiece of intimate and subtle sounds is filling the air. The opposite are the Fckn Bstrds; a noise collective running (or should I say ruining) the noise scene for years. They are absurdist and took giant piles of foam and other party material to create a big mess in the Little Devil. The crowd loved it and started crowd surfing in a garbage container. The noise kept flowing and flowing leaving the crowd violent and hungry for more. 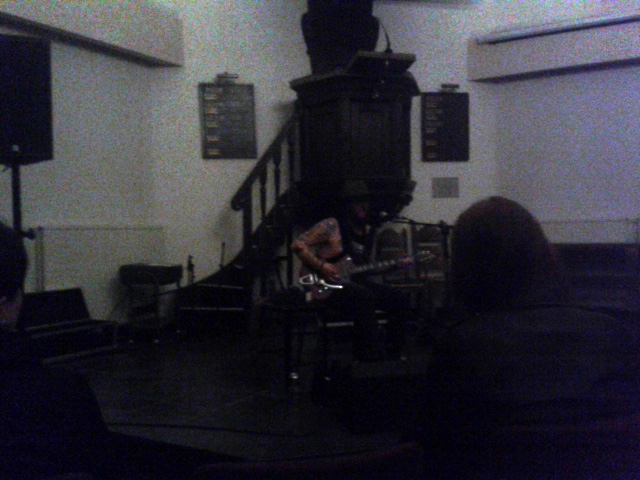 Frequently readers might know the SWNK album review of We Never Learned to Live. The screamo band from the UK is also mixing hardcore and postrock in a very energetic way remembering the heydays of Thursday cramped in a 2014 sound. The young guys are crafted with excellent songwriting and the vocals have the intensity most modern bands wish they have. It is time again for Theaters where Burial Hex is playing a one off show. The industrial/neo-folk/horror electronics artist has expanded his horizon with Black Metal vocals and classical sounds to create an awkward monster slowly shifting into a beautiful animal. All alone with incense and fire Clay Ruby has created an improvised show similar to last year’s brilliant album “The Hierophant”. Nate Hall is a dark singer/songwriter and is booked in the Pauluskerk. When his equipment fails he blamed it on god. His rough voice and improvised guitar sounds are as honest and pure as Hall looks. Ending tonight is Converge. The hardcore/metal band is at the top of the scene for more than 20 years now and their show is always full of craftsmanship and energy. Playing the favorites “You Fail Me” (with that dazzling and never ending riff) and “Concubine” the band cannot do wrong. The crowd picks up the energy and starts to mosh. With only five minutes left they leave the stage and comeback to play “Jane Doe”. The 15 minutes dissonance sums up everything where Converge stands for. Balls, Adventure, intensity and do whatever the fuck we want to do.

Early in the day Dirk Serries and Rutger Zuydervelt are mixing guitar drones with subtle electronics; idiotic perfectionists show us how to create absolutely beauty. 11 kilometers further in the woods of Oisterwijk is performing Ggu:ll in the Natuurtheater. Their slow pounding mix of Post Metal, Sludge and Doom sounds too monotonic at first but in the end be a sea of nausea. Paradoxically The Devil’s Blood vocalist Farida is joining the stage during the last song. Her mystique voice interferes perfectly with the distorted and depressive mood of Ggu:ll. Venue Extase hosts Priests. The loud Post-Punk foursome with a girl in a predator suit grabs your soul with her screams. Craftsmanship is compensated with loudness, power and to the point songs. The Stadskelder is a basement of a hotel and for almost every artist the stage is way too small to get a glimpse of the artist. Jessica93 is popular and for a full audience his mix of post-punk and cold wave (with drum computer) is food for those who want to start to shake the hips on Saturday night. Industrial techno from AnD is kicking off the dance night on Saturday but your writer has seen enough and gives his body and feet a rest. 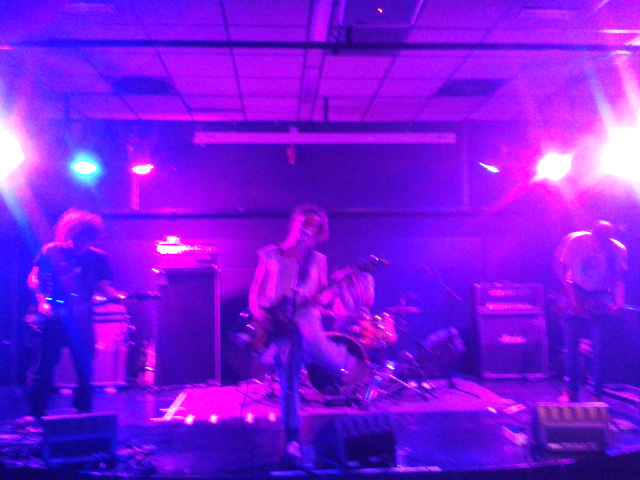 Sometimes you read the booklet last minute so I ended in the Paradox for Barshan. A heavy bass sound vibrates through the venue while drummer Thomas Jarmyr is improvising on his kit. With one foot in jazz and the other in metal the loud monster has turned away the Sunday laziness easily. 15 minutes and the set of Cocaine Piss is done in the Hall of Fame. The band from Liege is a full throttle punk/hardcore band with a crazy girl behind the microphone screaming her guts out. Your hangover is definitely over now. At the start of Hella Comet’s set in the V39 only 20 people are inside. The clash at this time slot is immense with Sophia and Lifelover playing somewhere else. The Austrian version of Sonic Youth doesn’t care and the alternative rock with noise is convincing easily. The girl on vocals has her own podium act with jumping during playing bass and singing. She fells on the floor and the microphone stand is falling down. It all fits perfect with the unconventional rock music. Incubate is all about surprises and Profligate is. A timid guy behind the knobs and microphone creates a dancing mood on techno and rhythmic beats. With nasal singing he gives the nerdy performance extra body; great soundtrack for an eighties porn movie. Incubate is coming to an end with The Black Heart Rebellion from Gent. The band has pushed the borders of Post-Hardcore with dark folk intermezzos. Songs from ‘Har Nevo’ are played just as new songs that later will be released. Closing off in Dudok is the ensemble Ukandanz; musicians who mix The Mars Volta with Heavy Riffs and Jazzrock. All over the spontaneous cocktail are Ethiopian vocal lines that turn the crowd in a positive dancing mood.

With a smile and a tired body I leave the festival. I am thinking if the organization is capable of meeting the high quality level next year. In the meantime I am already writing the dates of Incubate 2016 in my agenda because if next year’s edition is half as good I will be present.