This Music outtakes: “Taken By Storm”

When Lewis Dimmick’s “This Music” was finished, some pieces remained unused. When he told me about these pieces and asked if I was interested to put them on SWNK I quickly said yes. I mean, I really liked the book, as you can read in my review. So in the coming weeks we’re going to post a couple of them up on the site. We already had one about Freddy Alva, and here’s the second one, about Iron Maiden & NYC Mayhem. 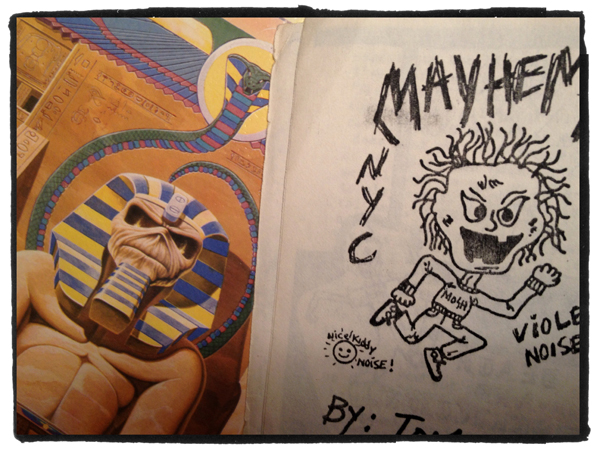 I ordered the NYC Mayhem demo from a fanzine called Mutilator. I sent my three dollars in the mail and received a tape back from Gordon Ancis, the guitar player. Interacting with the band so directly made a strong impression on me. I ordered another demo from the fanzine, this time from Nuclear Assault. I called a phone number listed at the bottom of their interview; it turned out to be the singer’s house. I sent him money and he sent me a tape. I was hooked.

I would sit on my bed and pore over the Powerslave cover art, all its masterful intricacies. The cover of the Mayhem demo, a crude doodle, something a bored kid might draw on his desk, was just as cool. Speedy was a wild-eyed cartoon with two teeth and scratches on his face, as though he’d been in a fight, with squiggle lines for hair.

The stripped-down aesthetic of the artwork translated to the music as well. Where Iron Maiden had just released their most epic composition, “Rhyme of the Ancient Mariner,” nearly fourteen minutes in length, Mayhem had a song on their demo, “Body Bags,” that was five seconds long.

On the flip side of the demo the band included a copy of one of their recent shows at CBGB’s. I was transfixed by those four letters. The live show was just as good as, if not better than, the demo. Kids only a year or two older than me were making music with a power and intensity that was overwhelming. The sound on the tape was incredible. The mood was intimate. The band traded banter with the audience.

Sitting in my room at the age of fourteen, I knew I had to go there.

Written by Lewis Dimmick, the writer of This Music, which you can pick up right here.