Part IV of this special already. This time we’ve got Lost Alone, Watch Your Step, Come Undone, The Ice and Civil Terror for you. To be honest I’ve don’t got that much left to say about the tape… I pretty much said it all. Maybe you guys & girls can help me out? Feel free to leave a comment on these bands. Missing them? Liking their new projects? Any special memories or good stories? Share them! Oh well, let’s just skip that stuff for now and go straight to the bands… 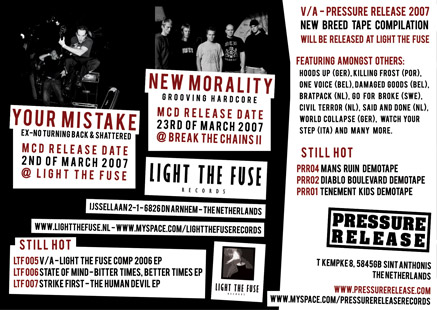 Another ad for the compilation. Together with Light The Fuse Records. Those were the days…

Death Threat. That’s what I thought when I heard some songs by Lost Alone back then. And that’s meant as a compliment. I don’t think I ever saw them play or heard much about them besides their track on this compilation, don’t know why. They sound solid enough if  you ask me. Hope I can catch Black Hill live some day.

So what happened to Lost Alone?
The band is still around and playing, we just changed our name to Black Hill. The explanation of this change is quite simple: an emo bullshit band from the UK called LostAlone and having more “financial power” than us – due to an astonishing and overrated success – “asked” us – through the mediation of their label and under pressure of a lawsuit – to change our name even if it was illegal. We first refused, being informed about our rights, and then realized that these guys were becoming pretty huge. We got mails from their “fans”, stuff like this, and realized that we had no interest to have the same name than a band which could eventually be on MTV. So we decided to change our name to black hill. It took us ages to find an agreement on a name we all like and black hill was the most simple solution we found. It has no precise meaning but is a pretty nice open window on different interpretations, and we like how this name “graphically” looks like. Otherwise nothing has changed: We still play our LA songs with the same line-up. You can check us out: www.myspace.com/blackhillhc

What are the best memories from that time?
Probably being younger and still having a strong passion for playing, with the project of reaching something with this band, I mean, touring, playing and giving something back to the scene that gave us so much during the last 15 years. And of course all these good times, playing shows, communicate and meet interesting people. .

What are the members of Lost Alone doing now? What should we be looking out for?
We’re currently all more than 30 of age and even if we still love playing and if hardcore still means a lot to us, our lives take different directions. Adriano, our bass player, became a father and I know he has the project to spend some years in Australia with his family in the close future. The 3 others of us also have different plans and projects. So we had to learn, as a band, to live one day after the other. As long as we have fun and have the possibility to play some shows in front of some people appreciating what we do, we’ll keep on going. We will also record a new EP in 2 months. We look forward to it and I love the new songs.

Lost Alone – Nothing For Nothing
This track was exclusive at the time we released the compilation tape.

I mailed back and forth with Leo of Watch Your Step (who I knew from saveyourscene.com) before the release of the compilation already. So when I was compiling a list of bands from Europe that would be interesting for the compilation Watch Your Step was a pretty logical choice. Italian youth crew, it even includes a “bust!”. What else do you need?

So what happened to Watch Your Step after the release of the tape?
Lots of stuff happened. we had a full length released on Hurry Up Records, we toured a lot in the following 2 years (Europe, Brazil, Europe again, Australia) and then we broke up in October 2008 right after the Australian tour. We reformed in January, and from then on we tried a new guitar player, but it just wasn’t working well and some of us had personal issues to solve. so we just went on hiatus for a good 6-8 months. Now we’re trying another new guitar player and also a new bassplayer. Looks like stuff is going ok with them and we’re preparing newsongs for a new 7″. I was hoping we could have it released within end of 2010….we’ll see.

What are the best memories from the band so far?
Touring and playing shows all the way. Playing outside Italy in Europe, Brasil, Australia was pretty awesome.

What are the future plans? What should we be looking out for?
I hope this new lineup we’ve recently built will stay stable for a while since we’ve had so many problems with it in the past. Our goal is to release a new 7″ within the end of the year. I hope we’ll do that. And then, restart playing shows and touring.

Watch Your Step – Not Your Friend

I don’t know exactly how I got in touch with this band anymore, but I’m sure I was just browsing Myspace or something and loved what I hear. Great melodies, totally my kinda thing. I remember I liked the artwork on their Myspace too: simple but different, “non-generic hardcore” stuff. Their new band Capitol sounds cool too.

So what happened to Come Undone?
After the compilation was released, Come Undone played several gigs and did two recordings: a self-released CDEP “Parts” and a second demo CD. At the beginning of 2009 the band split up.

What are the best memories from that time?
Definitely making records, visiting other cities and playing shows.

What are the future plans? What should we be looking out for?
After Come Undone disbanded, Peter – the guitarist – and Michal – the singer – started a new project, called Capital. It’s a rock/post-hardcore band, influenced by 90’s alternative rock sound. Check us out.

True Blue alert! With a name like that they immediately got my attention. Who doesn’t love the “The Ice” EP (although I prefer the demo haha)? Heard the tracks one night, send them a mail at that very moment I was listening to their tracks and everything was arranged in no time. Cool guys too.

So what happened to The Ice after the release of the tape?
After we have had our demo released on tape in 2007, DRA-Records from Germany contacted us, about releasing the demo as a 7inch. We agreed and released the demo minus one track from the demo tape (the overall playing time would have been too long for a 7inch) and got it out with three different artworks. After that release, we played some really great shows with bands we love. At the end of 2007 our former bass player Heiko left the band. We were writing new stuff for an EP/LP at that point and Heiko leaving the band threw us back a little. We had to find a replacement on bass, first. After Peter joined the band on bass, we invited an old friend of us to join the band on second guitar. It took us a year to get everything sorted out and write all the songs for the next release. Andy plays guitar in another band and I was still playing bass in Cheap Thrills back then, what slowed THE ICE down, also. Early in 2009 we did our pre-recordings for the EP on COUNTDOWN RECORDS from Italy. After that, we hit the studio for a couple of weekends and produced our latest release “TOUCHING THE VOID”, on which we tried to combine more of our musical influences than on the demo and explored our new songwriting possibilities, due to a second guitar player. The whole production process was a very satisfying experience for the band, meaning that we took time to experiment in the studio and work out some outstanding (as we think) ideas for the EP, which was released in November 2009. Since then, we played some more shows (not too many, though).

What are the best memories so far?
This is hard to tell, ‘cause we went through good and bad times together. All those experiences made us grow fonder and we became a really strong and solid unit by now. But well, speaking for myself, doing the recordings for the new EP was one of the best times for me, so far. We developed kind of a new (for us) aesthetic approach to the recording process. We wanted to set the recordings back in the late 80ies, early 90ies. We tried to avoid things like Pro-Tools, digital effects, triggering etc. And that was an awesome experience for me as a musician, who has been laying down tracks for bands many times before. This time it felt totally different. Very organic. So that was very special to me. And, in my opinion, the result is awesome!

What are the future plans? What should we be looking out for?
Right now, we are taking a little break from the stage to write new material for another 7inch. Something even more melodic and experimental… So keep your eyes peeled for that. Plus, everyone should check our myspace or facebook for further information on upcoming collaborations with brands and magazines that are involved into fashion and art more, than into the music biz.

The Ice – Powertrip
This track was exclusive at the time we released the compilation tape.

Where the fuck did you learn to drive? I think of all bands (and characters) Jasper did Civil Terror might be my favorite. That or A Step Apart. Doesn’t matter, this is about Civil Terror and they covered Fear’s – Livin’ In The City. Wish more bands did that.

So what happened to Civil Terror?
We released our ‘Surrounded by Assholes’ LP on my label Demonomania Records. I managed to get some pretty good distribution overall, there are a lot of places in the world now where you can get it. Too bad that probably nobody will ever buy it there so it will just collect dust on a shelf or in a mouldy distro box somewhere. After that, the effort we put into the band dwindled until the whole idea of the band was just ‘oh right, we haven’t quit yet’. We actually played two improvised shows in the US while all four of us were there and realized that the band was as good as dead. So, we decided to do one last show in our favorite venue (the OCCII in Amsterdam) and I managed to persuade Voorhees to do a reunion show. I think that was a pretty cool last show to play.

What are the best memories from that time?
Playing the LKPG hardcore fest in Sweden, driving to London for a show at the Running Riot fest, going on tour in the middle of winter and shooting a video in the grim and frostbitten forests of the Czech Republic.

What are the members of Civil Terror doing now? What should we be looking out for?
Our bass player and I are now in the sludge band ‘Starve’, whose debut LP will be released by Badger Records somewhere in September of 2010. The other guys are currently ‘in between bands’ and because of their busy work/PhD schedules are not sure if they even want to be in a new band right now.
– JJ

Civil Terror – Girls Girls Girls
This track was exclusive at the time we released the compilation tape.