Hi fellas… 2013 has been alright for music; lots of great local releases and tons of great shows. What else now? Oh, I ended the year with a getaway trip far to the east side of Indonesia; it has been said that they have one of the best ocean view over there, so this is like my “one of the things I need to do before I die” activity [*YOLO anyone? Nah… in Jakarta, we do YOLAY instead of YOLO. YOLO sucks, YOLAY rules. YOLAY is the equivalent of saying AMEN when great thing is about to happen. Say, if you are asked to fart on Gregg Ginn’s face by the guy himself, instead of saying yes you should say YOLAY! So can I get a YOLAY? YOLAAYY]. Then I started the year with “less screwing around and let’s get more serious” kind of life activities and I must say it does not work well. Focusing on working, teaching, recording, and doing little businesses here and there to make extra cash get tiring and boring. Meanwhile, repeating monotonous drinking activities during my spare time is not really a good remedy.

Fortunately though, boredom leads me to a great decision: tagging along in PUNK ALAY TOUR 2014. It was about time to points up my punk scores once again! Eight Punk bands hailing from Jakarta decided to play together in three nearby cities and I would have the honor to join their trip, YOLAY! All of them are good friends, they have known each other since long time and some of them are significant to Jakarta’s scene. PEACE OR ANNIHILATION, LOCK OFF, ZUDAS KRUST, HEURISTIK, SETARA, HELL ON FIRE, PECAH KEPALA, and BOMBARDIR are some of the finest punk bands in Jakarta. Jakarta has many great punk bands spreading all over the city thus these folks are only few among them.

The tour set off on Thursday night. We were supposed to arrive on Sumedang by Friday but due to my crappy routine, I am not able to take a day off or two because I work on Saturday. That situation leaves me no choice but to leave on Saturday afternoon. I went to Bandung with two friends by minibus travel. We armed ourselves with vodka mix and waited impatiently while cursing at the driver for he was taking too much time preparing himself before the ride. I mean, does it really necessary to do your hair, daydream, and buy tissue before driving? Ok the tissue might be useful but still, that was ridiculous. During normal weekdays, it usually takes two hours to reach Bandung from Jakarta but due to the weekend traffic plus street maintenance, we had to spend four hours. When we reached the venue in Bandung, everything is paid off. Except that, it did not. When we arrived at CAFÉ TERAS, we missed all the bands and the show got cut off in order to avoid further problems (apparently there was a fight, half an hour before my arrival). We sat for about fifteen minutes before we joined our group to leave the place. There were at least twenty five of us so the bus was really packed like a rotten squeezed tuna roll sushi. Indeed I said “rotten” as those drunken punks are enemies with hygiene so you can only imagine to be sitting around with them tightly. Ugh. Inside the bus, there are mixed scent of everything bad that can be smelled all over; carcass, bin Laden’s crotch, ancient apple, expired vinegar… not that I have smelled all of that before but just to give you an idea of how bad the smell was.

That was Bandung. I got nothing from that place except for the fragrance from those stinky punks. Next stop is Karawang, which is only an hour and a half away but the problem is… the destination is not exactly in Karawang. That night, we were supposed to find a cheap motel/hostel/whatever places for us to spend the night but nobody booked anything so we had no luck. We left Bandung around midnight and we stopped at the gas station, hoping that we could get some sleep over there. Some of us did but many of us preferred to get coffee and have a loud drunky chat instead. Early in the morning, about around 5 AM we left the place and head to Kawarang. From Karawang, we had to spend three hours of torture due to the road condition. Picture this: the road is small, probably only fit for one car and a motorbike and it has too many holes. Hell some of it is not even asphalt. It was rocky and muddy. Hail the punks! Twenty something of us were cheering for the unpleasant ride! Our bus driver was up for the challenge so he did the best he can to deliver us from imminent danger.  Apparently, from what I heard before, this venue is located in front of an ocean. Yes my friend, our next destination is: to the beach! Through a broken path… made by the devil… praised by sinners… and cheered by the punks. It felt like we were riding a dollar fee Disneyland wannabe attraction. For three hours. YOLAY!

By the time we reached the venue, I felt disappointed because the beach does not meet my expectation. I expect blue water, white sands, girls and bikinis, but instead, it was dirty and full of garbage, even the water is brown and the sand is pale. Totally not YOLAY…  Aside from that,  I learnt something very interesting… there was this boy inside the bus whom I thought is the son of the driver, turned out that he is more like his “personal assistant”. This boy has been riding with us since day one. Nobody knew his parents, age, background, not even the driver. Hell nobody even knows his real name so we call him “ipang” but sometimes we call him “julung”. We dressed him with punk shirt so he would become one of us, and we threw him into the mosh pit so he would have the best time of his life. He did. Legend has it that the boy was sent by Thor, the god of thunder himself. The bus driver told us that he found the boy sleeping inside his bus during a rainstorm. Since then, they became work partners. The bus driver insisted that we need to be gone before dark because of the road condition. Therefore, we left Karawang around 5PM and headed back to Jakarta safely with several good stories. It was nice for us to meet “Julung”, to smell Roy’s fart, to drink countless cheap wine, to hear Haji Rusman’s joke during the trip, all in all it was great; total punk, total YOLAY and much respect for all the bands (too many to mention but all of you rules!) and the people who help us out during our trip.

For the bands: PEACE OR ANNIHILATION formed back in 2004, and probably the oldest one in the group. Along with BOMBARDIR and ZUDASKRUST, they play punk music in the vein of Discharge, Avskum, and the likes. PECAH KEPALA, HEURISTIK, and LOCKOFF are newer bands and they play 80’s European Hardcore Punk and D-beat. SETARA plays traditional oldschool punk blended with grind; think about Extinction of Mankind and Assuck mixed with Disorder and Crucifix. HELL ON FIRE is probably the easiest one to be described. They play a punk version of Motorhead and they have some serious catchy tunes; sometimes, they remind me of Inepsy from Canada. All of them have releases so if you are into oldschool punk and you want to show off your punk friends about your new collections from Jakarta Indonesia, you can contact Anugrah Esa at doombringer.records@gmail.com  YOLAY!

*All pictures were taken by Gunawan Giox Gunz, a handsome looking lad from HEURISTIK. I lied. The dude has long dreads and scary face.YOLAY. 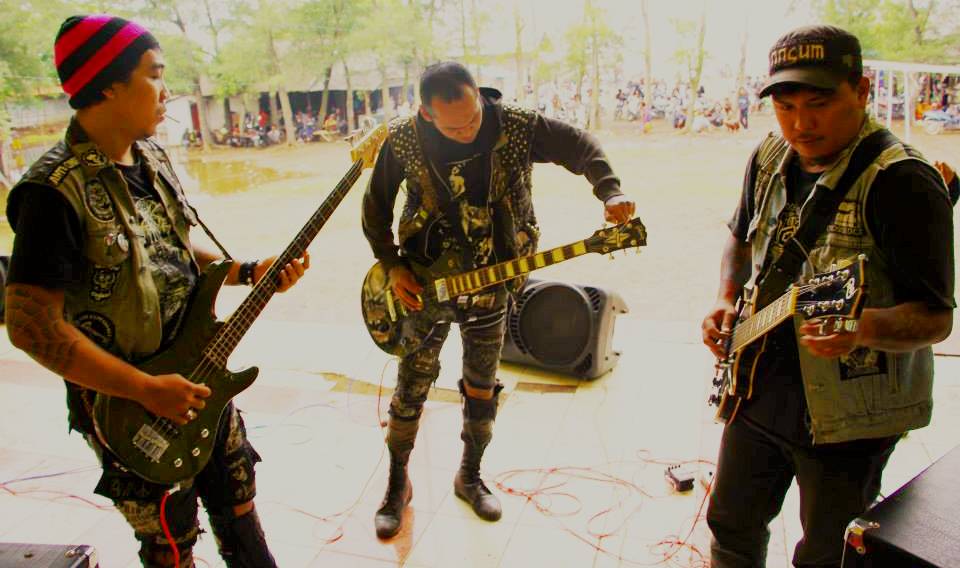 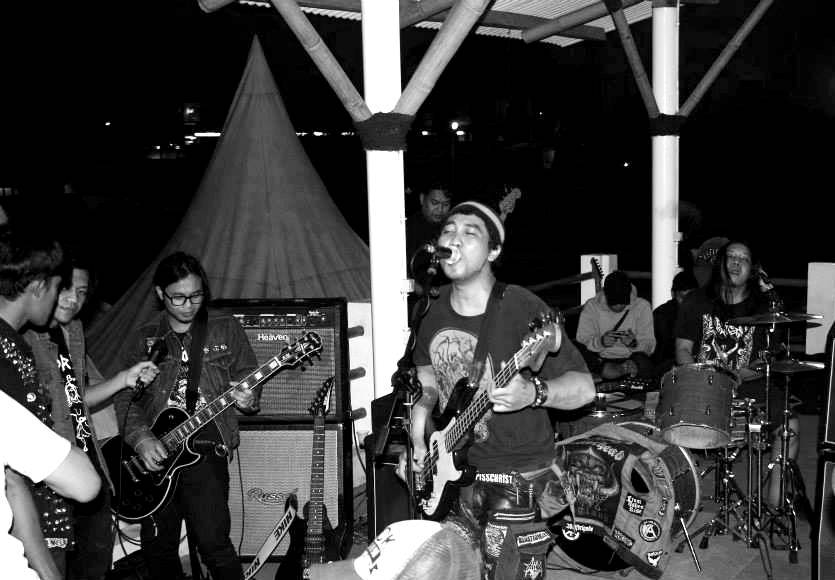 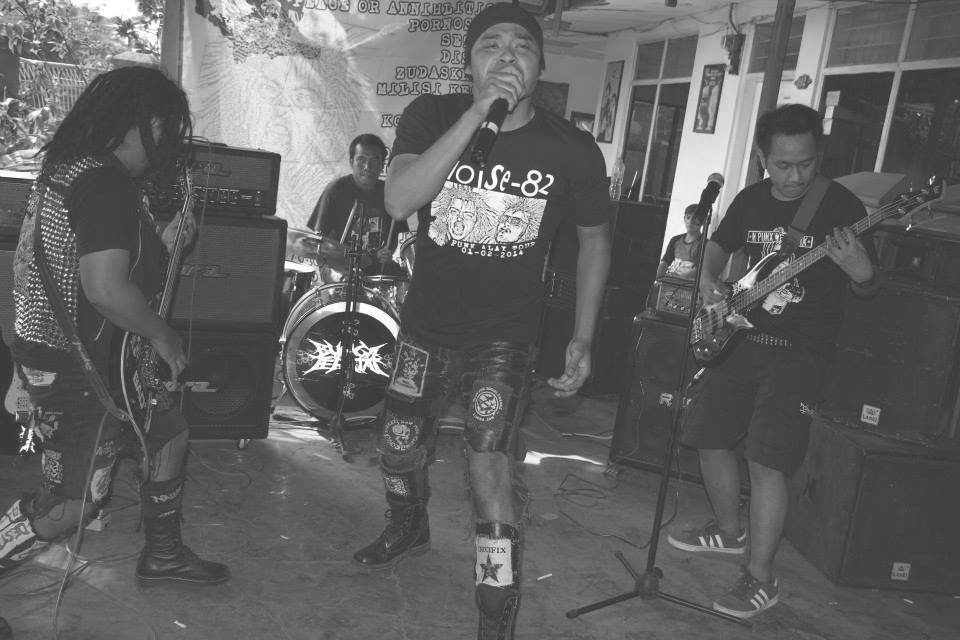 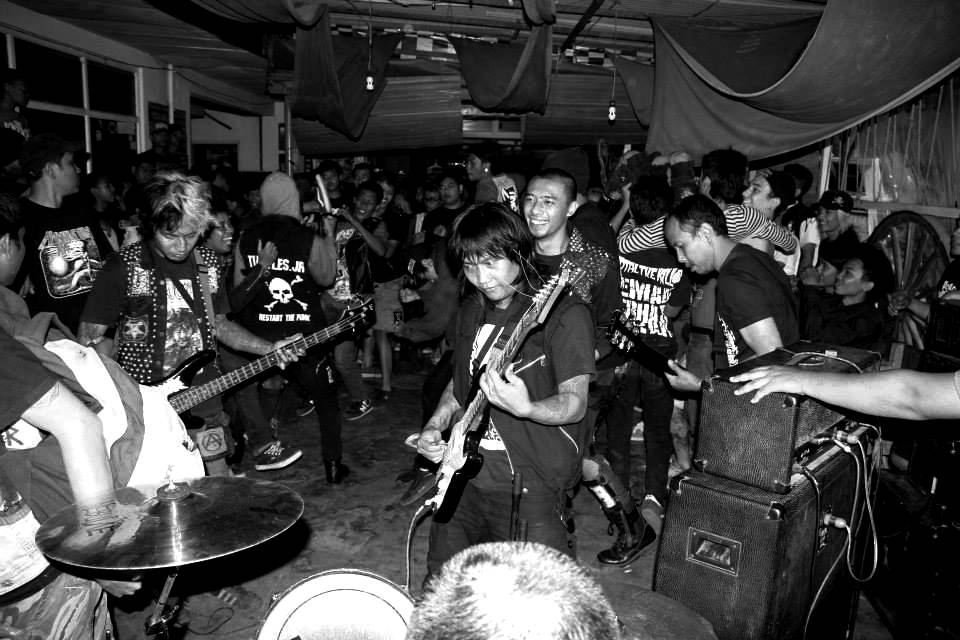 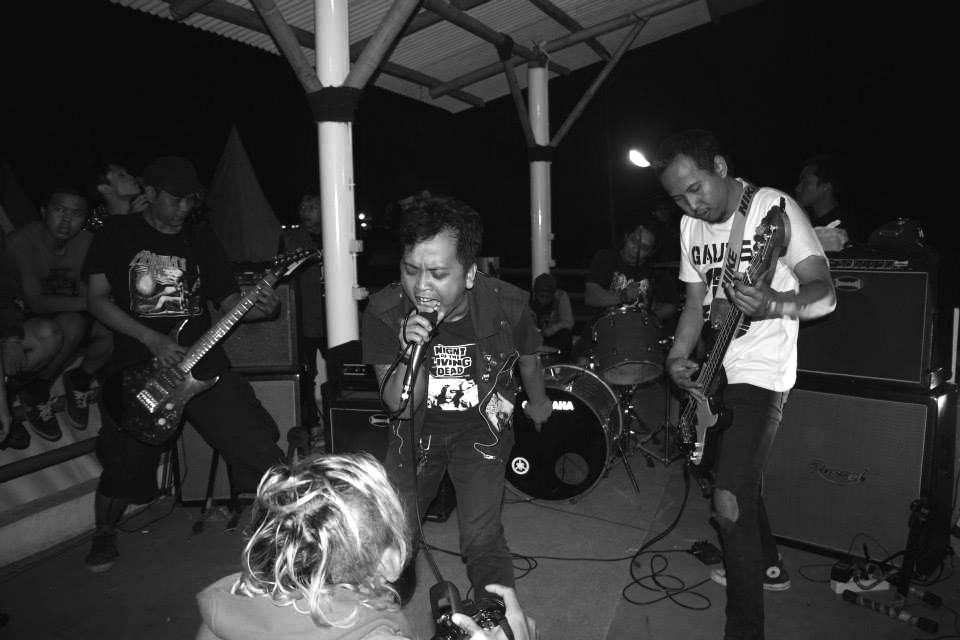 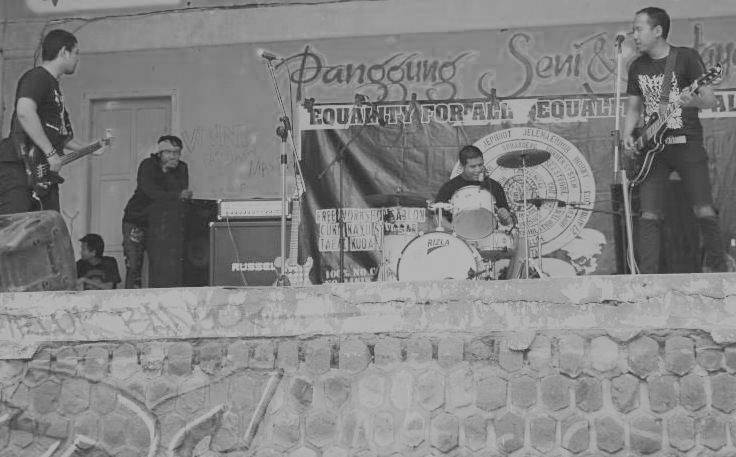 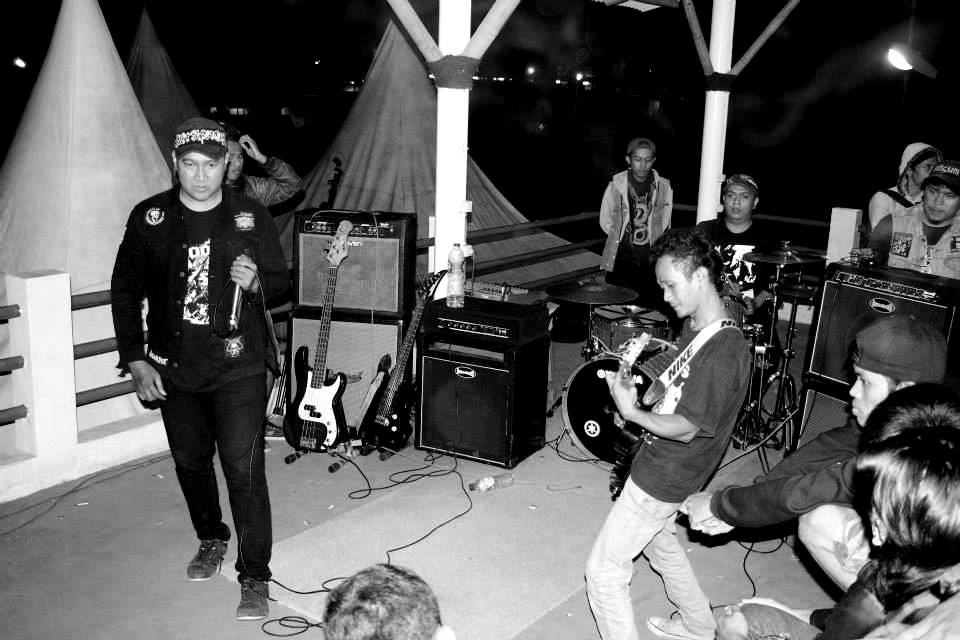 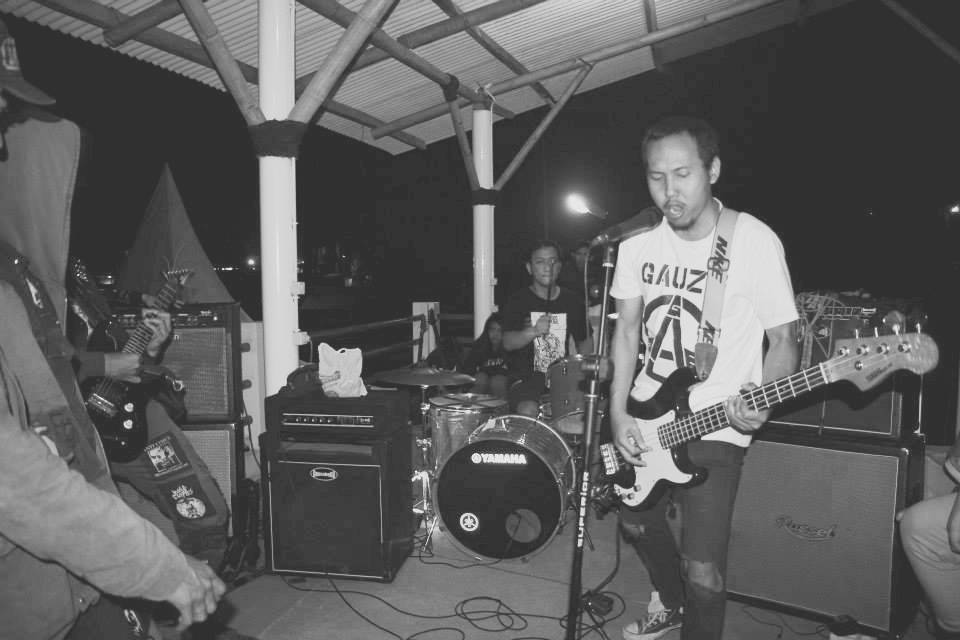 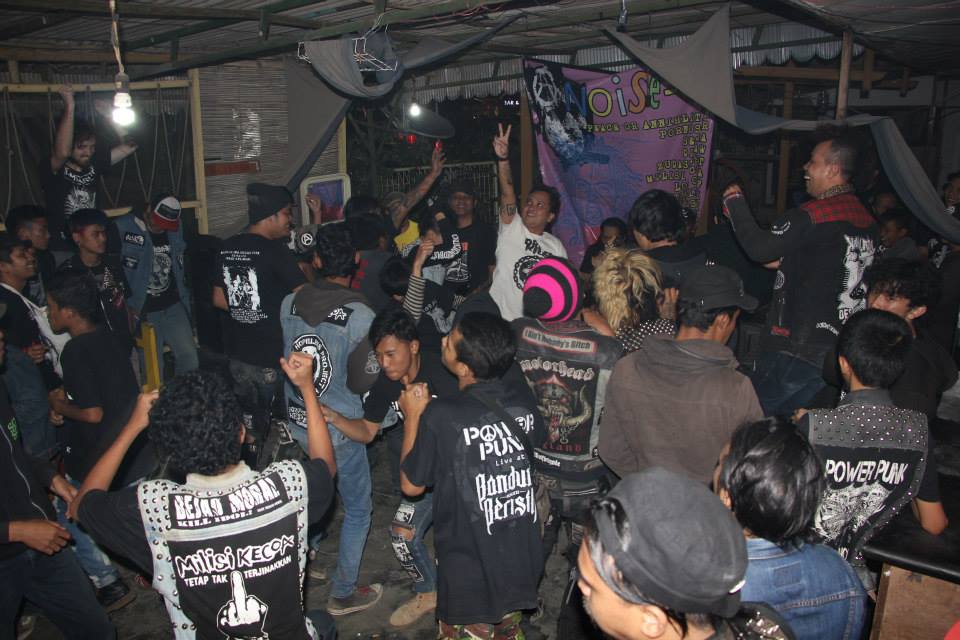 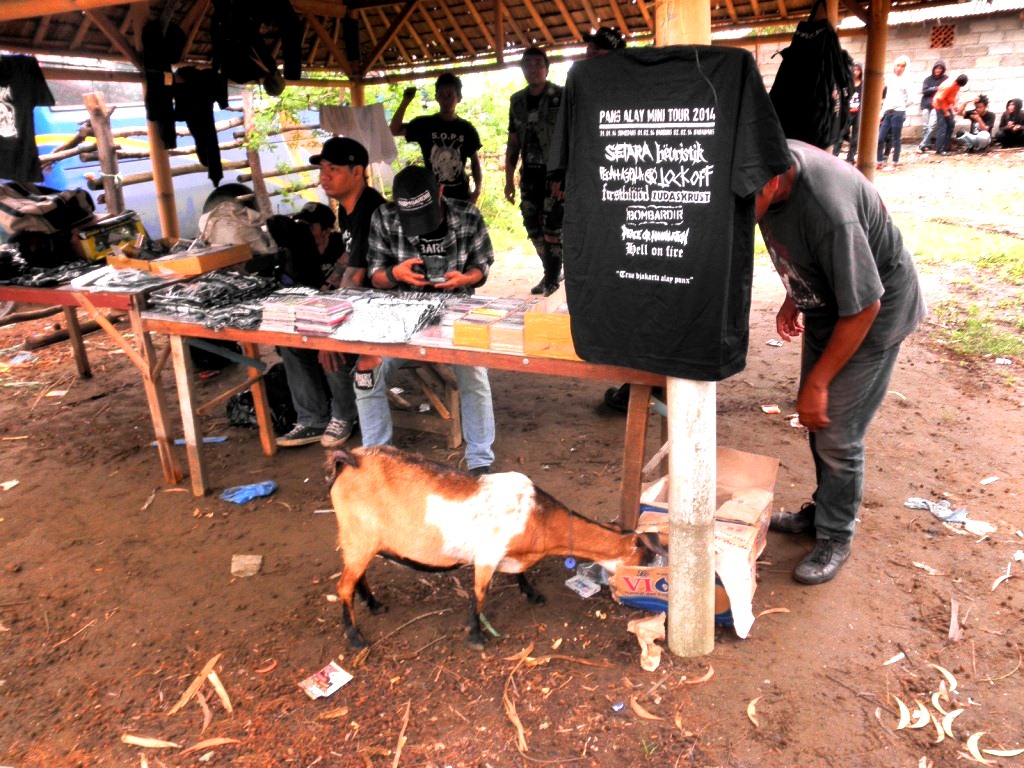 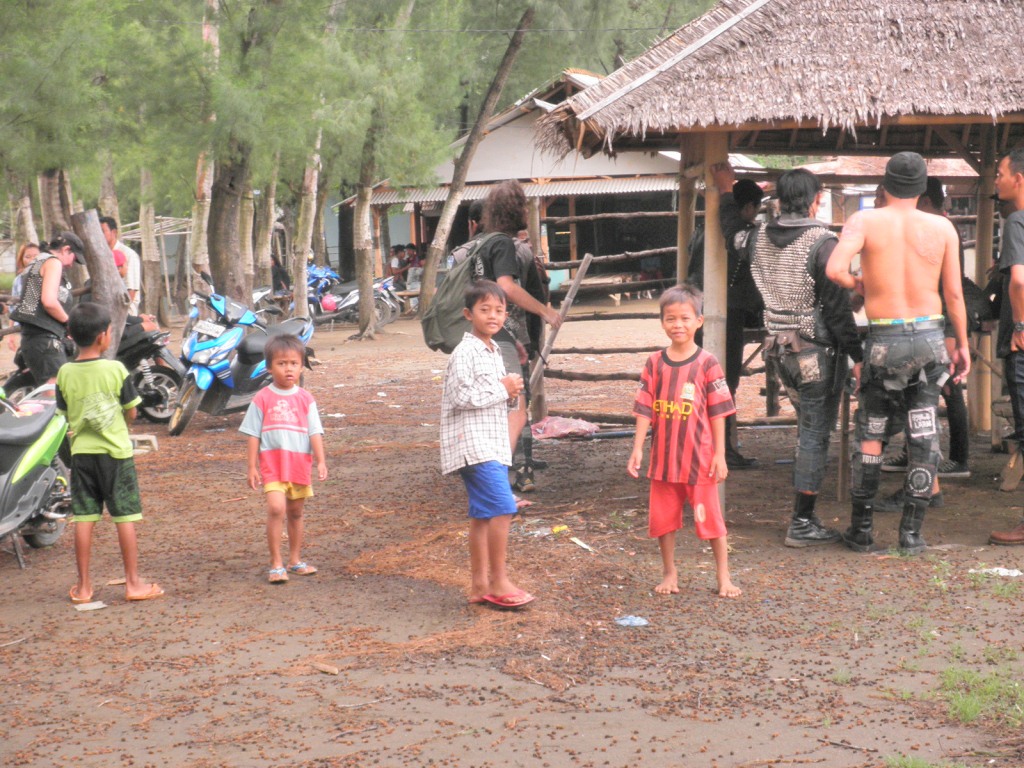 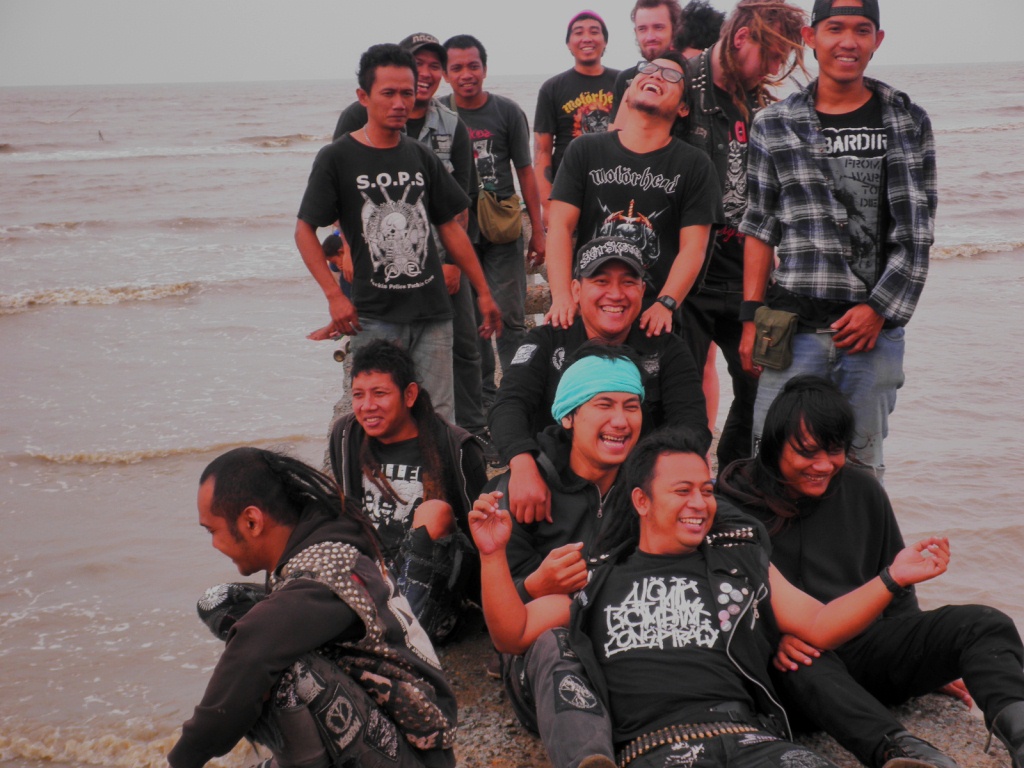 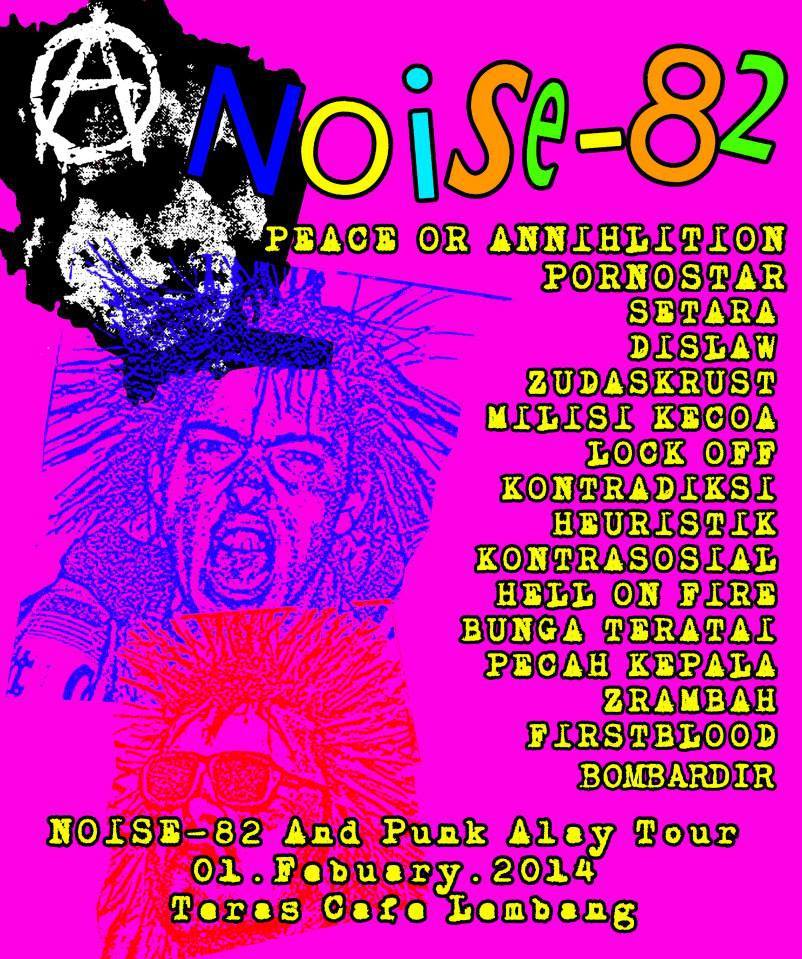 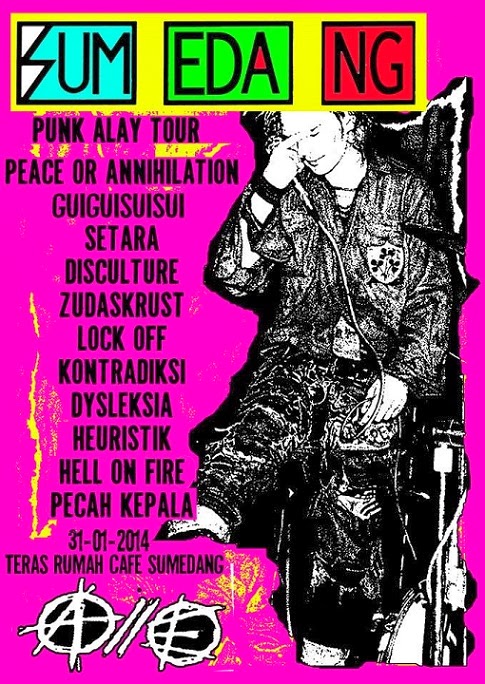