“La Vache Qui Rit” or should I say “The Laughing Cow”? 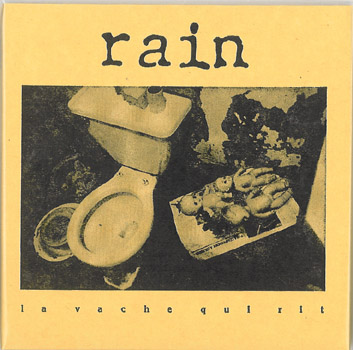 For whatever reason I don’t see people talk much about this band. You can’t seem to find much on them either. That’s a shame though, they’re damn great. For people already in the know, just blast those tracks again today. You know they’re worth it. For everyone else, if you don’t know about them yet, check this out:

So let’s see… Rain was a short-lived band from Washington, DC. They were part of the second wave of “Revolution Summer” (when “emo” still stood for good music) bands. In 1986 they started out as a three-piece. For Eli Janney and Jon Kirschten (not counting the brief stint in Gray Matter) it would be the first proper band they did. Bert Queiroz already played in the Untouchables, Youth Brigade, Double O and Second Wind. In this line-up they played several shows and recorded twice in 1987. The first session (as a three-piece) resulted in a 4 song demo tape. The second session (where they added Scott McCloud of Soulside to the lineup) resulted in five songs, produced by Ian MacKaye. One of those, “Worlds At War”, was released in 1989 on the “State Of The Union” compilation (Dischord). The rest of the songs (+ one of the tracks of the demo session) were released in 1990 when Guy Picciotto (Fugazi, Rites Of Spring) released it as a 12″ titled “La Vache Qui Rit” (pictured above). Not long after that they broke up and members went on to other projects; Eli and Scott would form Girls Against Boys, Bert Quieroz would join Manifesto and later Thunderball and Jon would play in The Chris Bald 96, Special K and Las Mordidas.

Anyway, just listen to the first track of this record:

Rain – That Time of Year

Since the 12″ is still available digitally from Dischord, I’m not going to put up the rest for download.

Or listen to the 12″ tracks on this fan-made Myspace page:
http://www.myspace.com/raindc

So what other, less talked about, gems are out there?

PS > If you like this kinda stuff, you should also check out the Dutch band Union Town. For whatever reason I always think of Rain when I put on Union Town and vice verse.