We’re doing this for about 4 months now and the feedback so far has been great. Thanks! Keep it coming, either good and bad. We want to hear it. We only want this thing to grow, to get better. Anyway, here at SWNK we do our best to provide you with quality content all the time. And sometimes we’re pretty stoked ourselves on what we’re doing. Like with this post. Maybe not for everyone, but for some of you this will be cool. You already had a look at the title, so you know this is going to be about Razor Crusade. It has been in the making for some time now, but today we can finally unleash this. We hope you enjoy!

Oh and here’s a warning. If you don’t want to read a rather lengthy and personal trip down my “Razor Crusade” memory lane, just scroll to the bottom for the real good stuff.

Razor Crusade. Thinking back brings back quite some memories. Starting on the 22th of November 2002. Reaching Forward was playing their final show at the Goudvishal in Arnhem. Also the day I got suckered into buying a Razor Crusade demotape. Bassplayer Harm was walking around selling them packaged in weed bags. I don’t remember if I listened to it a lot or not, but I liked the fact Mark was drumming (who I knew from his previous (local) band Anubiz, which I pretty much considered godlike back then), that’s for sure.

Sometime after that show I ran into Mark at school (Grafisch Lyceum Eindhoven) and he was pretty excited about the recordings he had with him. He gave me one of his earplugs and before I knew it I was listening to the new MCD Razor Crusade recorded, “Are You Wired?”. I was blown away. It sounded agressive and heavy but there was lots of melody too. I do know I played that record to death. Great production, lots of energy and a nice looking digipack. Everything just made perfect sense. Looking back it’s funny they came away with ripping of Boy Sets Fire’s ‘Release The Dogs’ in ‘Fountainhead’ though haha.

I remember seeing them live at the Extase (I’ll never forget Harm’s Caught In The Act shirt he wore that show) in Tilburg with Born From Pain. A show in Vriezenveen where I got a ride back in the Razor Crusade van while I kept saying I thought Kai, Reaching Forward’s first singer, was terrible haha. Couple of beers too many. Which reminds me of the European Hardcore Party 10 they played when Mark was handing out beer coins (everyone else in the band was straight edge and he couldn’t handle it all alone haha). And of course the show in Den Bosch with Give Up The Ghost.

But then their first singer had to leave the band. I’m not 100% sure but it was something along the lines of him having to go train the police force in the East some martial arts skills, since he was a well known cagefighter. But in the end he apparently wasn’t a cagefighter and not going to the East either. Oh and he did forget his passport in the van. I love that story (and will repeat it again and again, less accurate each time…) and he might not have been the greatest live singer, but I really liked what he did on “Are You Wired?” 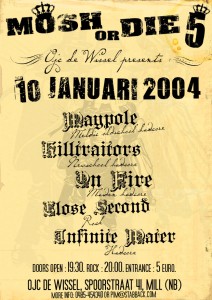 Anyway, Razor Crusade was on the lookout for a new singer and found one pretty soon. Enter Ivo. Back then I was putting on shows in a local youth centre and Harm approached me if they could do a secret show with him. Just to try it out. They didn’t want their name on the flyer, I had to make it say Infinite Water and they wanted to play first. I didn’t have to think twice about it. Loved that band. Of course they could.

A perfect fit. That’s how it sounded. I loved “Are You Wired?”, but this seemed like a big step up. Something that was not only confirmed, but even increased when I heard the first recordings of “Infinite Water”. I just knew they were going to do big things. I really thought they would break out of the hardcore scene and blow up. Big time.

So after the release of “Infinite Water” they jumped on a nice tour in the UK. And that’s where the first goods come in, footage from that trip that hasn’t been available before. The quality isn’t amazing, but this is from before there was HD folks. It gives a pretty good view of a Razor Crusade show though.

Sometime after that Mark announced he left the band. He wanted to focus on his study. Smart guy. I thought that sucked though, great drummer and an all around cool guy. Anyway, Daan (formerly known from Downslide, and after that he also played in Justice a.o.) stepped in and things looked bright for Razor Crusade. They had a great new singer, “Infinite Water” was receiving great reviews and Deathwish Inc. picked it up and released it in the USA. They went on a tour with Stretch Arm Strong in October/November and February had another European tour in store. When they would come back they would record a new EP. Big plans. They even referred to themselves as “bulldozers” in a press statement about Mark leaving. Ready to take over the world.

But not much later it all came to a halt when I got a mail from Harm (I think it was June 27 2005), with a request to put the following text on their website with a black background (oh yeah I forgot, somewhere along the line I got asked to do their website):

No statements.
No last interviews.
No final show.

Although I heard about Ivo’s voice not coping that well with the many shows and the mix of screaming and singing it still amazed me. I thought they were going to pull through and take over the world. And to this date I believe they could have done that if they would have kept going. But we all know that didn’t happen…

Ok, so why did I just type all of that out? Well… If you did you read the lengthy text you might have noticed I mentioned they would record a new EP when they would get back from that European tour. And they did. They recorded 4 songs (including a Claw Boys Claw cover) that started to collect dust the day I put that message on their website. In the years after that I spoke to Johan (Reflections) about it a couple of times and there were always some vague plans to one day do something with them, but nothing ever materialized. I kept listening to those tracks now and then and around the same time we launched Some Will Never Know I tried again. This time he liked my idea and when I approached the band they luckily felt the same. 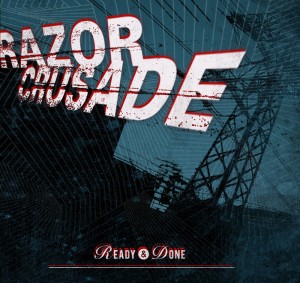 So here we are. 6 years after these songs were recorded they finally will be available to everyone in high quality (MP3’s already made the rounds in private circles). If you ask me, this is probably the best material they ever recorded. Dr. Doom The Optimist was already a favorite of mine during their last shows, but the recorded version might just be my favorite Razor Crusade song ever. All in all I’m just glad they’re set free now, everyone needs to hear this. These songs deserve to be heard.

This has been in the making the last couple of months. First we had to find the master. Which proved harder than expected. But Johan luckily managed to find it in a box somewhere. Once that was done, we needed artwork (since that was never made before). Ivo (aside from being a great singer he does great artwork – www.ivostudio.nl) took care of that. Up next? The lyrics. Ivo had to sit down and listen to the songs again to write em down. And to finish it all, the idea came up to include liner notes. So the band collected liner notes from people who were there and involved in one way or another years ago. And now it’s ready & done (just had to use that somewhere, come on, you would do the same).

Check out the full package at BandCamp.

Everyone involved, the band, the label and us, we all tried to come up with something good for you. You can download it totally for free, or you can enter any kind of amount you feel like, if you want to support the label. (They payed for the recording and never made that money back – nor do they expect to make that back now.). Be a gent. But whatever you do, enjoy these tracks.

Below are some excerpts of the liner notes, but really, download the full package to read em all. They’re worth it:

“We were motivated, driven, hard working and often running faster ahead of ourselves and biting off more than we could chew. If anything I think that’s why we broke up, even though I’m still not entirely sure what happened.” – Harm Haverman – bass

“I still recall the evening I first heard these last recordings as if it was yesterday. We played a show together with them and Harm gave me a quick listen. That’s when I knew… at least when I thought I knew. This was it, these guys we’re going to get their big break very soon. I couldn’t have guessed it was going to be indefinite.” – Aart Stekelenburg – Face Tomorrow

“Unfortunately when the recordings were finished the first cracks started to show. Other obligations from the members got in the way of really taking the band to that next level. It didn’t take long before we knew things wouldn’t work out. It’s not that there are any bad stories to tell. No fights. No arguments. No nasty shit. Just something that happens with a lot of bands… they simply stop.” – Johan Prenger – Reflections

“Razor Crusade was only around for three years. If you look back the road they had taken was destined to crash and burn someday. Still that day came too early. I’m glad the last Razor Crusade songs are finally available and hope that one day we can really say goodbye to one of the best Dutch bands of the past ten years.” – Arold Roestenburg – A Riot Of My Own / Some Will Never Know

Where are they now?