Some months ago I saw people asking for a digital copy of the Reaching Forward demo. Since I made a rip of my demotape (without cleaning it up – but it sounds okay) not too long ago I could hook em up. So I did. Anyway I thought it was cool to share it with more people, so here it is. I don’t know if these tracks were ever released aside from the demotape?  It’s a nice little document to see where Reaching Forward came from. This demo also has Cay on vocals and not Johnny who sung on all later recordings. Since part of Reaching Forward are playing This Is Europe Fest in Arnhem on the 9th of October as “Mordax” (releasing a new 7″ and even playing some Reaching Forward songs – you know you want to be there), even the timing is perfect. 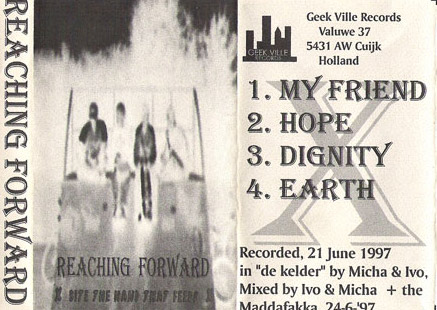 I could tell a whole story about this tape, but I thought it was way better to let Harm (bass, but you know that right?) do the talking, since he was there and part of it all:

These four songs were recorded when we were 15 or 16 years old. We’d all met the previous year through skateboarding and got into hardcore and straight edge together. We had literally just discovered YOT and Minor Threat when we recorded these songs and you can hear we didn’t really have a clue what hardcore was supposed to sound like. Remember it was the heyday of 90’s vegan metal mosh and there were no bands that we knew of that played the style we loved. After putting out this demo tape it seemed like bands were popping up left and right. Guiding Line in Rotterdam, Vitamin X in Amsterdam, Fair Fight in Utrecht, Product X in Tilburg, Spirit 84 in Friesland, and we got caught right in the middle of it. Commitment offered to put out a 7″ and Mainstrike kinda took us under their wing. They got us on shows and drove us there because we were all too young to drive. Things took off and before I could blink twice I was 5 years older and had toured the world and played insane shows to insane crowds. Listening to these songs it’s hard to believe this is where it started. We came from the smallest of towns in the most dark rural parts of Holland and we all ended up in bands touring the world. We saw all of Europe with Reaching Forward and beyond with the bands we joined after RXF. I’m proud my friends I did this with have gone on to do bigger and better things.