When I first heard about Carl the Mosher’s death yesterday, I couldn’t believe that such a vital part of the hardcore world had passed so suddenly. While I didn’t know him well, I was lucky to have the opportunity to meet him in 2006 and stay in touch sporadically over the next few years. Not only was Carl an essential part of some of my favorite bands, but he was also pleasant and generous in all my interactions with him. He will be missed not only for his contributions to the genre and moshing lore, but also for his patience and grace in answering all of my stupid questions.

When you hear people’s stories about where they were when they found out Raybeez had died, or JFK, they were usually doing something cool. Unfortunately I can only say I was sitting at my desk at work when I found out Carl had passed. Then again these days a lot of hardcore moments have happened while I was sitting at my desk at work (rarely paid to post – I am more on the Working Hard tip rather than Hardly Working) from the Token Entry reunion being announced to the Cro-Mags Stabbing. At first I was hesitant to add my comment to Carl’s Facebook wall since most of the people commenting were those who knew him well for decades, hardcore luminaries among them. But soon kids of all ages and backgrounds were sharing their memories, pictures and videos.

I met Carl on the day of the Dynamo reunion at CBGB’s. It was August 27, 2006: one of my favorite shows ever. Outburst, Dynamo, Backlash and Social Disorder all reunited that day, in a lineup that also featured All Out War’s first show in a while, Uppercut being fucking fucking clear, a great Merauder set and Poison Proof covering Life’s Blood. I have a lot of great memories of that day, from Uppercut’s sartorial splendor to Merauder playing Crossfire. One of the many highlights was Dynamo’s set. I was too young to have caught them during their 90’s and never thought I would get to see those songs played live (or that there would be enough demand for a reunion.) My best friend Stefan videotaped it for me, which probably led to his camera running out of battery during something important later like Outburst or Merauder. I took a couple pictures during their set myself – looking back I’m trying to figure out when I stopped moving long enough to take them. Perhaps they played an unreleased song like Lady Luck that I didn’t know and was less inclined to go nuts for? Either way, I managed to capture a few stills of the Dynamo experience. At the end of their set, Carl handed out Dynamo and Icemen records to anyone standing nearby – one of the coolest conclusions to any reunion set. 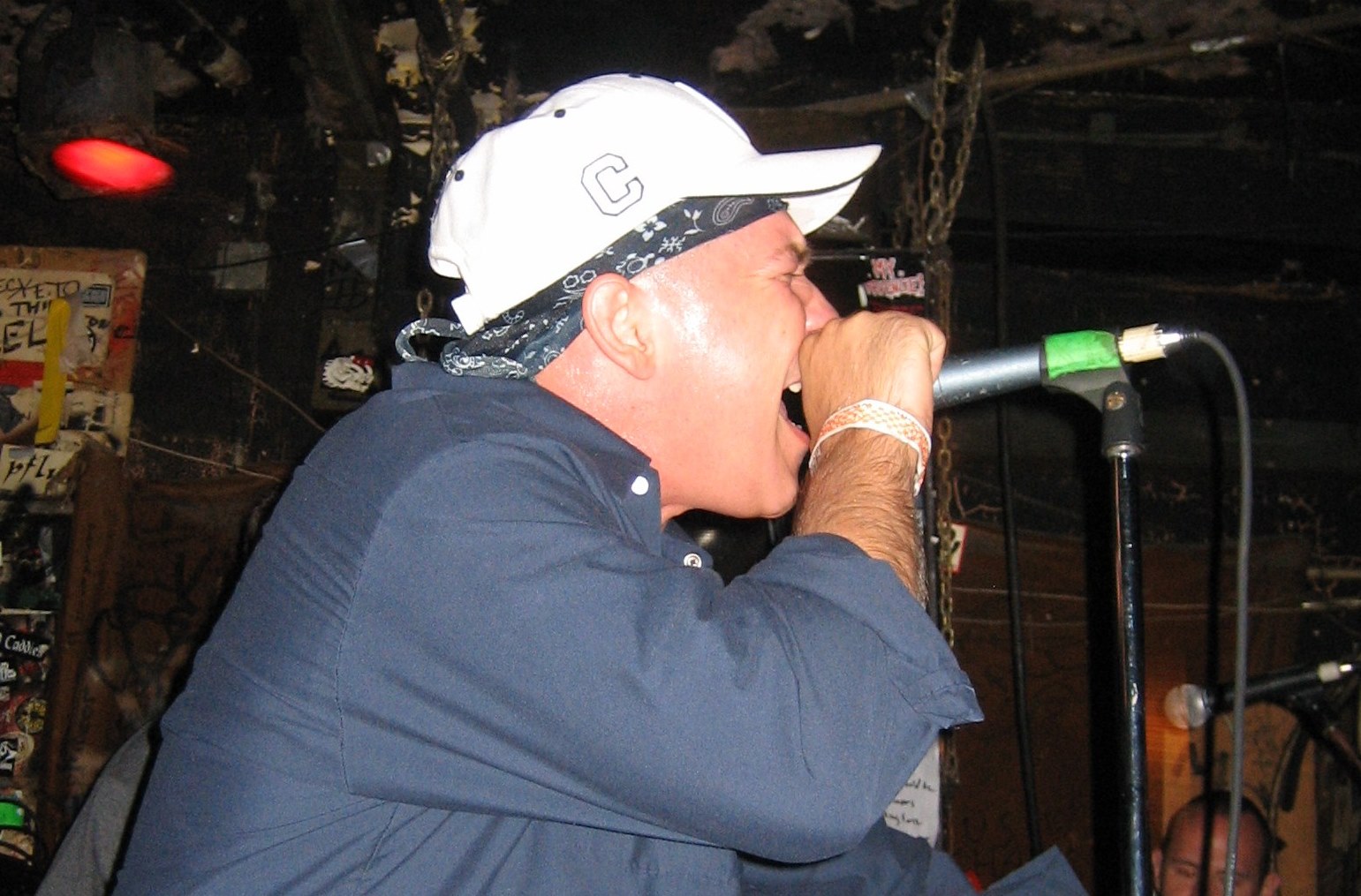 Outside CB’s on the sidewalk afterwards, I can’t remember what was the impetus to introduce myself – perhaps Stefan made me do it, because I am ordinarily shy about that stuff. Somehow I ended up meeting Carl and bonding over the fact that we both owned a Yamaha Stage Custom. We exchanged contact info and set up a phone interview a few weeks later. Of course I had years of unanswered questions about the Icemen, Dynamo and M13 and here was my chance to seek out the answers.

A few weeks later I called him at home in Texas and after some initial technical difficulties with the speakerphone on my parents’ landline, we were underway. I learned so many things as we covered a myriad of topics, from the M13 shows at a bowling alley in Carteret, NJ to the origin of Carl’s nickname (which was bestowed on him by Ray Cappo.) The best material I got was probably about the Dynamo era, and how his experience with the Icemen led to Dynamo’s DIY strategy for distributing their music. That night was also the first time I discovered how many unreleased Dynamo songs existed, which I hoped might someday become available as a new album.

Afterwards I set to work on the daunting task of transcribing everything we’d discussed. I am pretty bad about finishing things when I say I am going to do them (thanks Pim for being so patient over here at SWNK) and I never did finish putting our conversation on paper. Although I did receive some additional motivation one spring day in 2007. I was standing on line at Aljon’s Pizza in my hometown when my phone rang. It was Carl calling to ask if my band at the time was still playing shows, if I knew any local promoters in the area, and if I would be interested in opening for Dynamo.

Of COURSE I would be interested in playing with Dynamo! I mean, just getting to see Dynamo again would be worth carrying my drums around. I had pretty much given up hope of ever getting to see the Icemen live, but seeing Dynamo again was a realistic thing to look forward to. Carl had even mentioned the possibility of putting out a 7” of unreleased material, which was possibly even better news than more live shows. Unfortunately, all of this never came to fruition, and I never finished transcribing the interview either. Now that Carl has passed, I feel a bit like Henry Wiggen not sending that scorecard to Bruce Pearson from his last game. How much time did I spend doing other stupid stuff over the last 7 years?  If I dig up those tapes at least the rest of you guys will get to see it, even if now Carl never will.

As news of Carl’s death spread yesterday afternoon, people started contacting me to ask if I’d heard. Sadly it was the same subset of people who usually call or text me excitedly when the Superbowl of Hardcore lineup is released, but this time we were in touch for a more sobering reason. My heart goes out to Carl’s friends and family – I knew him so little compared to you guys. But I appreciate the kindness and generosity he showed in all our interactions. Instead of cultivating an abrasive personality that some might associate with hardcore legends, he handed out free records from onstage and patiently answered the queries of this tomboy in a Side by Side shirt.

Well I got my courage, and I got my pride. Will I be keeping it real until the day I die?

I’d say you did. Rest in peace Carl, and thank you for everything.