Time for the second post in the Supertouch series this month. After the show in Nürnberg it was time to head over to Lichtenstein. Not before we did some sight-seeing in Nürnberg though, such a great place. Lots of WOII history over there. I’ll not bore you with those details now though.

So on Saturday the 15th of January we got to JZ Riot in Lichtenstein. A special occasion, because it was Greyli’s birthday. If you don’t know him, he drove a lot of bands in Europe and sets up shows in Lichtenstein and Rosswein. But more importantly, all around great guy. I can think of worse lineups to celebrate your birthday… 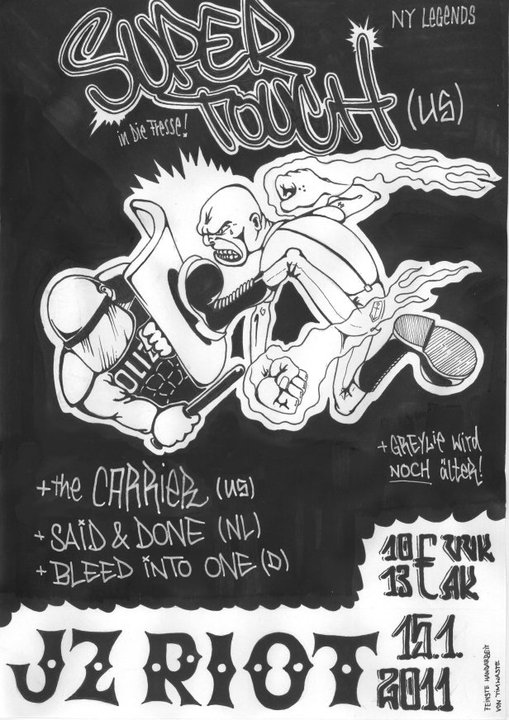 Touring, even if it’s a weekend, is also a lot of waiting. Waiting in the van until you’re at the place you need to be, waiting for the backline to be set up, waiting for the soundcheck. You gotta be a patient boy on tour. And yes, I just typed that stuff only so I could include the picture below. 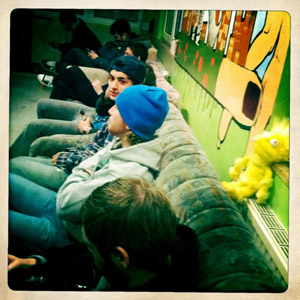 Anyway, Bleed Into One opened the evening with a nice set celebrating their 10 (I think it was) years of existence. Also check out singer’s Alex other band World Eater. Good stuff. After that we (Said And Done) did our thing and then it was time for The Carrier. I didn’t see them, don’t remember why anymore. But I was probably resting / chilling after our set. I made sure to not a miss a minute of Supertouch though.

Mark said his voice wasn’t doing too well, so I was curious to see how he was coping. It’s the worst thing that can happen to you, being a singer. Makes you feel small and hopeless, atleast that’s how it makes me feel. But aside from the fact they did cut the set short a bit (no Better tonight for instance) it sounded pretty damn good again.

Jon was worrying about his amp. Something went wrong with at the first show and the night before (in Nürnberg), candlewax (from Empowerement’s set) got into the amp and messed things up. But he got it fixed and that seemed to be working properly again too. Up next is “How Do You Feel?”, one of their best songs if you ask me. The chorus stucks in my head for days everytime I hear it.

They might have omitted “Better”, but “Searching For The Light” wasn’t missing from the setlist.

After the Supertouch show it was time for the afterparty. My idea of “taking it slowly” this trip (still on my “losing weight” crusade) went pretty much out of the window when the bartender started to give away free drinks. I don’t know what kind of stuff he served us, but it was a lot and it had all kinds of colors. Good times.

Up next week, footage of the full show in Essen.