You may already be familiar with the name Dave Araca. In fact, he is mentioned in Mike (Doghead)’s review of the recent Integrity ‘Kingdom Of Heaven’ 7″, since it was released in Dave’s memory. If you haven’t come across the name before then basically Dave was an active drummer in the Cleveland punk rock and hardcore scene from the early 80’s through to his tragic death in 1994 from an aneurysm. He played in The Dark, The Guns, Bowel, Asphalt, False Hope (bass first, then drums), Integrity, and probably more. Asphalt only finished recording their album two weeks before Araca’s untimely death. 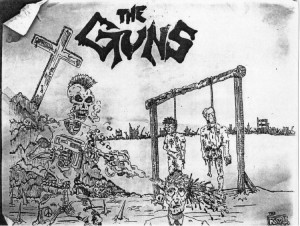 The band we’re talking about today is one of Araca’s earliest bands, The Guns. In 1983 The Guns – an ofshoot of The Dark, and barely into their teens – recorded a truly great punk rock record that never had an official release.

A couple of earlier tracks from their 1982 demo made it onto the The New Hope compilation on New Hope Records (run by Tommy Dark of The Dark), and one from the shelved album was featured on the ‘They Pelted Us With Rocks And Garbage’ comp by Negative print zine. But these were the only ‘official’ outings.

At one point Dwid from Integrity even released the album in stealth as a bunch of extra songs tacked onto the end of the Bowel ‘Rotten Fecal Duct’ album (on which Araca also drummed) on Dark Empire Records. More recently you might have heard fellow Cleveland band Cheap Tragedies covering The Guns, or you may have heard the rumour that Grand Theft Audio were interested in putting the album out, but the trail to get this record a proper release went cold. Until now.

Smog Veil Records has announced that it is giving the album an official release in May 2012. It looks like it will be a double LP retrospective which gathers up the demo, the album, and some other odds and sods. My suggestion is that we start sending Smog Veil nagging emails around April time checking that things are still on track for the May release, and waving our money at them.

Sadly its is not just Araca who is no longer with us, vocalist from The Guns Scott Eakin died of a heart attack in 2008. A couple of years prior to Scott’s death a CD called ‘Attack’ featuring rerecorded versions of some later tracks by The Guns came out on SFE Records. 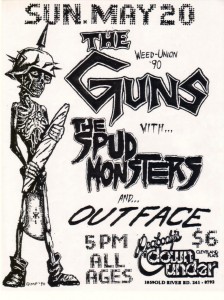 Meanwhile another band called The Guns has sprung up, from my native land of South Wales of all places. But I do not care for them, and neither should you for that matter.

In summary then, the best way to pay tribute to one of Clevelands longest kept secrets, whilst simultaneously ensuring your Summer is made better by the arrival of a double slab of teenage punk rock greatness is to order this LP as soon as Smog Veil will let you.
Links:
Love Bunni Press (gallery of The Guns & Cleveland hardcore flyers)
Smog Veil Records
The Guns on Myspace
The Guns write up on Punkmuzik.com