THIS IS HARDCORE 2011 report

On August 11th I flew out to the US for a couple of weeks; my first stop was the This Is hardcore fest in Philadelphia. I only went on Friday and Saturday. Although I would have loved to see Reach The Sky, Morning Again, From Ashes Rise…  Sunday was dedicated to discovering the beautiful city of Philadelphia (well, mostly hang out at Govinda’s actually…). Anyway, here’s a report of the fest. Hello and thanks to all the nice people I met.

After flying to JFK and spending the night in NYC, my girlfriend and I took a bus to Philadelphia to attend THIS IS HARDCORE FEST 2011. The first thing that stroke me on the way was how nice the surrounding of Philly was! We left our stuff at the Hostel and headed to the Starlight Ballroom. The venue is located in an almost deserted area past Chinatown.

The fest actually started the day before at another venue, with Underdog as a headliner and some cool other bands like Mindset, Foundation, Reign Supreme…The first band to open on Friday was Wrong Answer. I saw them on their euro tour with Guilty and thought they were okay, but this time they sounded great. I guess the fact that they had two guitars and their original bass player helped. The band I was probably the most excited to see was up next: Praise. There were a little less people up front, but the band delivered! Andy Norton is a great frontman, and their drummer is mind-blowing! They also played the two songs from their new single with the singer rocking a tambourine at the end, that was awesome! Do I need to mention the Inside Out cover? Oh yeah. 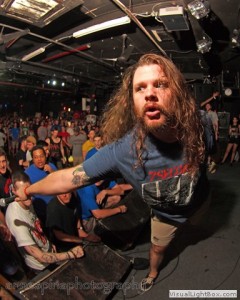 After their set I went outside and met Evan and Mike from Mindset who told me that most bands were awesome the day before and that Peace, a new band with the singer from The First Step, played a surprise set. We talked for a while and I missed Mother of Mercy. It was past 6 pm and I still hadn’t had lunch, needless to say I was starving. To my dismay there was no vegetarian food available at the fest, only hot dogs and snow cones. We walked around and found a Venezuelan restaurant that did vegan and vegetarian meals. Unfortunately, we got back right when Nails were finished. That was a bummer, I really wanted to see them! Ringworm played and they were okay I guess, I never really got into their stuff, so I hung out inside the venue. There were many distro tables (React!, Reaper Records, SFU, Bridge 9, Deathwish, Youngblood, Triple B…) and I got to meet a bunch of people I’ve been in touch with through email for years, which was really cool.

Mouthpiece was another highlight for me, I’m a big fan and I was dying to hear those songs live. Man did they deliver! I saw the footage of Hands Tied last year, that was pretty cool, but Mouthpiece’s set this year was even crazier! Tim McMahon is still on top of his game, and all the band members were so much into it! The stage diving craze was a bit scary for me at first, US kids really go off, and sometimes I felt that they weren’t really looking out for the people surrounding them. I could definitely do without the headwalking though… They ended their set by covering “True Till Death” from Chain of Strength, the place went nuts!

I was curious to see Title Fight and check out what the fuss is all about. Their recent LP is pretty good, but I still find it weird how big they are in the Hardcore scene. They played a really energetic set with the crowd singing along. I could tell they were giving all they had, but the vocals were so out of key sometimes it was almost painful. Being a fan of their records, I expected Token Entry to play a cool show, but I was wondering if the band could still pull it off after all these years. Well, they blew me away and rocked the place beyond anything I could have imagined! 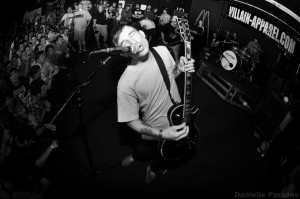 By the time H2O were setting up the tiredness started to be too much. I watched from a distance and was pretty surprised that the older songs didn’t get such a good response as the newer ones. I was so tired after their show that I contemplated the thought of going home but Youth of Today gave me an energy boost, because… well, you know… it’s Youth Of Today. So, I don’t want to rain on the parade, but I thought they really sucked. Ray Cappo was only singing like 20% of the songs, with acting crazy all the time and not even singing the right words on some songs. Porcell was playing half of the songs as well, leaving the scabs to run the ship. Honestly it was much better when they played in Europe a few months ago. But the crowd was really into it, it was non-stop stage diving and singing along. I do feel like I’m full of shit now though because I just watched the video of their set and it’s actually really fucking cool… go figure.

We took the time to visit Philadelphia for a little bit, and I’m glad we did because that’s a really beautiful city full of history and nice buildings. When we arrived to the venue I realized that Dead End Path and Stick Together switched days, and that Stick Together was about to play. They opened with a SSD cover (”Glue”, of course), which was really cool; but the rest of the set was weak in my eyes. Their 7” failed to impress, and I really don’t get what this is about. It all sounded pretty generic, the band had no charisma whatsoever, but kids were going off. That’s probably because they’re a local band; and they sound like a local band to me. Coke Bust was another band I was eager to finally see, after all the good things Staffan from Stay Hungry has to say about them. They were really good, I loved how they confused the audience by playing such a raw and relentless set. It was also refreshing to hear a more punk band among all the heavy bands playing that weekend.

Bitter End were good but their music didn’t grab me as much as it does on record. It was weird to see them on stage though; they look like a bunch of G.I JOE playing Heavy NYHC. Of course they had a good reaction and kids were moshing. “This is Hardcore – For – Hardcore”. If there’s one current band many fellow Europeans are excited about (and frustrated not to be able to see), it is The Rival Mob. Their last 7” “Hardcore for Hardcore” turned many heads, and it’s in my headphones several times a week. I was afraid they didn’t live up to the “hype” surrounding them (for lack of better words), but they were A-MAZ-ING. I think this was the best set of the fest for me. The singer looks very much like Will Ferrell and has a really special attitude on stage, he’s a lot of fun to watch without really goofing around either. The band played so hard, it was furious! The singer gave it 100% and even puked because of the heat. I passed on Maximum Penalty for lack of interest and need of food. 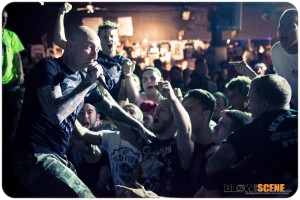 But I wouldn’t miss Betrayed for anything. Their last minute set at Ieperfest in 2008 was one of the best times I ever had at a show. Aram is still a great frontman and one of the few at TIH who had something of substance to say between songs. The songs from the new 7inch were amazing live, even if “Suffering” weirds out a lot of people, I love that song so much! It was hard to remain up front with all the people going off, so I couldn’t enjoy the show as much as I wanted too. Seriously, I’m wondering how do these kids who don’t all have insurance can be so crazy, you gotta see it with your own eyes, they could seriously injure themselves. Not many people seemed to know or be interested in Ressurection; but I was excited to see them and hear those songs live. To be honest there was a weird vibe. Nobody watched them and most of the audience was just staring. But the band was really into it! I mean, can you imagine Rob Fish playing a bad show? The bass player was going crazy, and the guitar player of Floorpunch looked quite old with his beard, it was a weird combination on stage. To my surprise I also noticed that Norman Brannon (Anti-matter Fanzine, Texas Is The Reason…) was standing on the side of the stage. I picked up the 2xLP discography that Deathwish put out, these songs have been remastered by Kurt Ballou and they really sound amazing!

Just before Pulling Teeth played, some of the members switched instruments and played a short set as Hatewaves. It was fast and a bit metallic; it was ok but not my cup of tea. Pulling Teeth on the other hand were awesome. Mike Riley is a very charismatic person and seeing him smiling on stage, although they’re playing such dark music, is always cool. They played a bunch of new songs from their LP with a couple of guests (including the singer from TUI); and some older songs as well. Their set was short but not disappointing at all! Unfortunately I missed Damnation AD because I was outside stalking Norman Brannon. But I heard that they ended their set with a really good Gorilla Biscuit cover. 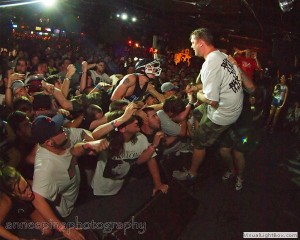 I got there for Cold World and that was a show not to be missed! They didn’t play the “How the gods chill” song with Sean Price as I hoped they would, but we did get some of their best material and the band was great! Of course the response was crazy, it gave me the chills. At one point the singer said something along the lines of “despite the rumors, we’re not breaking up; we recorded a new LP a couple weeks ago, it will be out soon” and then they played a new song. Definitely one of the coolest shows of the fest as well.

I missed the beginning of Bane’s set because I finally got to meet Norman Brannon and give him a copy of my zine. I had never expected I’d meet him, so I felt like a little kid, that was weird. Anyway; Bane were good but after seeing them a bunch of times they don’t really do me anything anymore. It was cool to see them though, and I enjoyed it a lot. I guess the fatigue was taking its toll. I didn’t really enjoy Strife. I watched them from the back and there was a weird vibe. I thought that having one of  their (still) Straight-Edge friend singing their most Straight-Edge song was a bit lame. I didn’t really need to see Blacklisted playing their old stuff, I’m mostly into their latest records, and I had way too much Hardcore music for a day. For some reasons I think I haven’t managed to see Terror in 4 years, although I’ve been to many of their shows since then. On the way back we heard some music coming from a small club in an empty street. It sounded familiar, the security guy at the backdoor told us it was Alkaline Trio. Unfortunately it was time to go to bed. 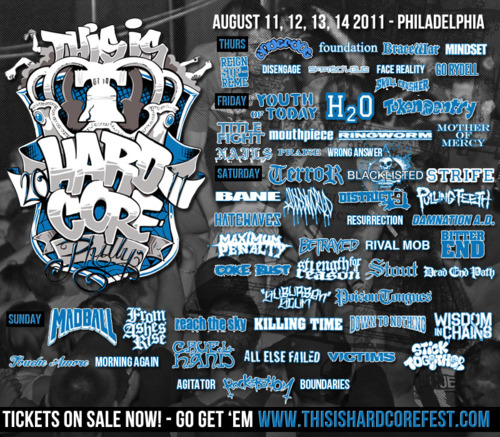