This Music outtakes: “I Was There”

When Lewis Dimmick’s “This Music” was finished, some pieces remained unused. When he told me about these pieces and asked if I was interested to put them on SWNK I quickly said yes. I mean, I really liked the book, as you can read in my review. We already had one about Freddy Alva, one about Iron Maiden & NYC Mayhem and here’s another one, about “Some Records”. 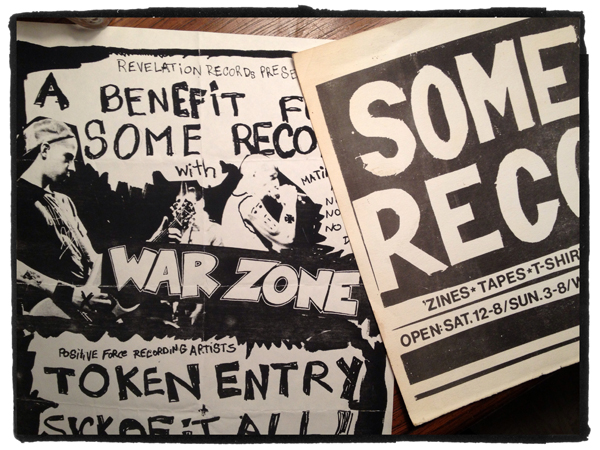 At the bottom of the stairs, in front of the door, sat several bags of garbage. I took out my phone to take a picture and got a weird look from a guy leaving the store above. Probably the owner of the property, I thought. I went on with what I was doing and so did he.

The imagination makes allowances. I decided to go inside.

To the left were three cardboard boxes with LPs for sale. To the right were flyers for demos and shows, and wanted ads for musicians. And there was Duane with his glasses and mop of hair, sitting behind the counter, hanging out.

We were hanging out, too: Hobi was there, Bryant, Pat, Harv, Chuckie, Rich, Ed, Freddy, the whole gang. On top of the counter were two rows of demos for sale.

Tommy Carroll was back there with Duane. Raybeez was hanging out talking to Gavin. I sat on a milk crate, listening to the music.

I viewed these guys with awe. They were cool. They were tough. They were creative. I had a band, too. We weren’t very good, but our tape was for sale.

But it was time to leave. I crossed the street to McSorley’s, where a friend was waiting on me. I was carrying two worlds, and leaving one for the other.

I wanted to go back.

Written by Lewis Dimmick, the writer of This Music, which you can pick up right here.