When Lewis Dimmick’s “This Music” was finished, some pieces remained unused. When he told me about these pieces and asked if I was interested to put them on SWNK I quickly said yes. I mean, I really liked the book, as you can read in my review. So in the coming weeks we’re going to post a couple of them up on the site. Probably 3 or something. You’ll see, just keep an eye on the site. Here’s the first one, about meeting Freddy Alva. 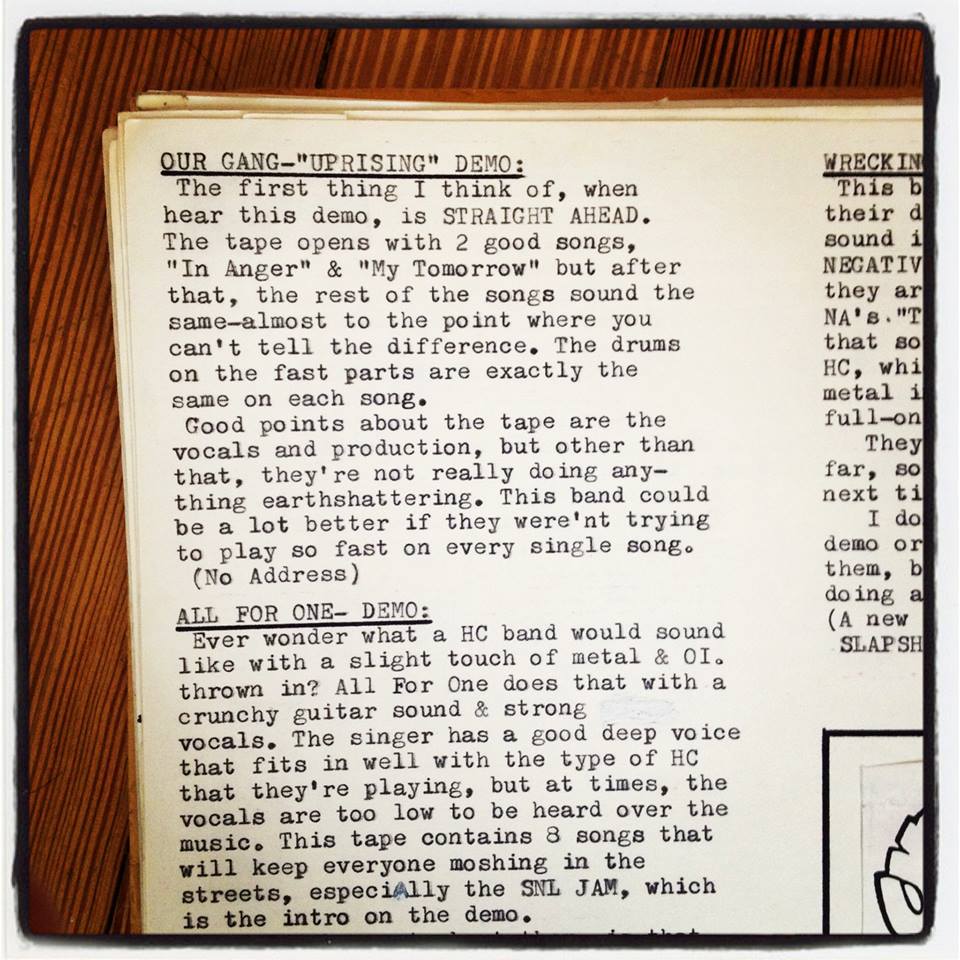 I first met Freddy Alva not long after he reviewed my band’s demo in his fanzine, New Breed.  The year would have been 1988, although no year of publication is given anywhere on the pages, indicating the degree to which the participants in this scene, kids for the most part, lived entirely in the moment, without consideration of what they were leaving to history.

The cover of the fanzine features a drawing of the New York City skyline, with the words “New Breed! New York” written in graffiti letters over the top.  Also on the cover is a picture of the band Raw Deal live at CBGB, a poor photocopy that fails to translate most of the details of the photo, leaving it represented in splotches of black and white.  The price, one dollar, is penciled in at the top.

The band I was in then was Our Gang.  Fred wrote that the first thing he thought of upon hearing our tape was Straight Ahead, who were one of my favorite bands, and one of the fastest bands in New York.  I was thrilled to know that not only was someone listening to our tape and writing about it, but comparing us to one of the best bands in the scene.  But he went on:  “The tape opens with 2 good songs, ‘In anger’ & ‘My Tomorrow,’ but after that, the rest of the songs sound the same—almost to the point where you can’t tell the difference.”  I took issue with that statement and decided to write him a letter.

I don’t remember what I wrote exactly, probably something to the effect that he was wrong, our songs didn’t all sound the same, and maybe arguing against his assertion that we weren’t “really doing anything earth-shattering.”  Hadn’t we, after all, taught ourselves to play instruments, and found like-minded people to make music with, and written songs, and gotten ourselves to a studio and recorded them, and dubbed cassette copies on boomboxes to sell to the world?  At 17 or 18 years old, it did feel relatively earth-shattering.  And being in a band was, it’s not difficult to remember, my whole identity.  How dare Freddy attack me in such a way?

Of course I was young and hadn’t yet learned that valuable lesson about art, that its existence is not defined by the artist’s impression of his own work, but by how that work is perceived by an audience.  That is the final truth about art.

It was true.  That first tape sucked.

Before long I got a letter back in the mail.  We met up soon after at a show in the city and have been friends ever since.  It’s a good way to start a friendship, through the exchanging of ideas, over something that matters.

Photo by Freddy Alva.
Written by Lewis Dimmick, the writer of This Music, which you can pick up right here.