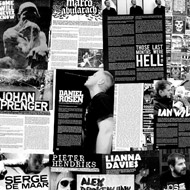 You might have heard it by now but issue #2 of Some Will Never Know is finally done. After selling it for the first time on the Said And Done weekender in Belgium and the UK this weekend it’s now available for everyone to order online.

With more pages (100) and a smaller font you’ll be getting even more content this time around. The quality printing remained, but the zine is now binded/glued like a magazine.

So what’s in it? Pretty personal and in-depth conversations with the following people:

There’s also a tribute to the Goudvishal venue inside. 14 pages filled with memories, pictures and flyers of one the greatest venues the Netherlands ever had.

Oh and like in issue #1, there’s a (digital) mixtape too.

If the above video and image isn’t enough of a preview, you can check out the Marco Abularach interview on the SWNK website.

The zine costs 4,50 euro a piece. I know that’s quite a lot for a zine, but considering the amount of pages, the printing costs, the time that went into this one…

Or team up with some friends and order a couple. From 5 copies and upwards there are wholesale rates! Even better rates when you order 10 or more. So distro’s, get in touch!