No For An Answer recorded new ep 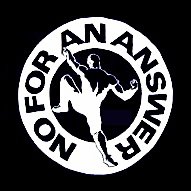 Legendary Orange County, California hardcoreband No For An Answer have hit the studio for a new 7″ to be released on TKO Records soon. No For An Answer’s frontman Dan O’ Mahony has posted a studioreport on Double Cross webzine.

These are the songs that are going to be on it:

Side one:
MAN AGAINST MAN – an OC staple that has seen various incarnations since the original core riff came wafting out of Joe Foster’s Les Paul. Unity played a version of it as ‘Better Man’, Ignite recorded a version with lyrics loosely translated from the NFAA live performance on the Icemen Cometh 7″. Now NFAA contributes its studio rendition of our version with the stripped down and direct version of the Man Against Man anti-racism lyrics and a slightly heavier playing style.

Side two:
IT MAKES ME SICK – actually one of NFAA first handful of songs from ’87. Every time we’ve played it since those early years we’ve wondered why the hell we didn’t put it on the You Laugh record. The lyrics were inspired by the shameless support that many in the American south had shown to the political candidacy of former members of the KKK. By pairing this tume with Man against Man I guess this ep becomes our anti-racism ep!

And finally…
IN THE BEGINNING – a new/old tune particularly appropriate now as we grow older, it acknowledges the importance of taking the central message (for me it’s tolerance and a values driven existence) of this music out of the club and into the world.

Here’s some footage from a No For An Answer reunion show two years ago:

Band: No For An Answer